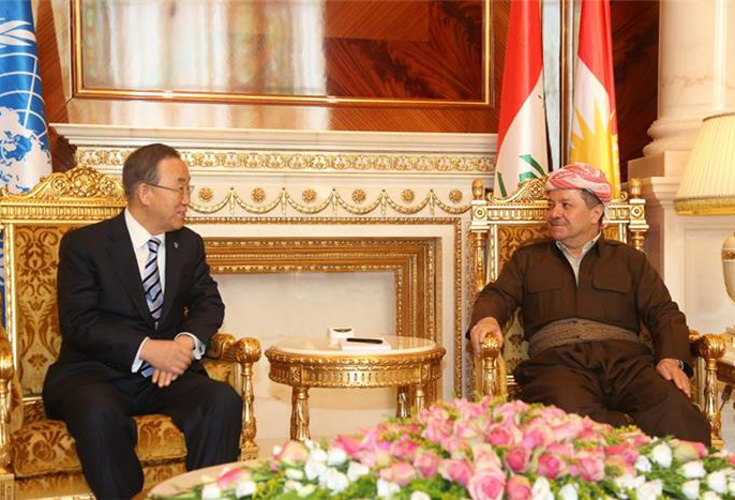 Erbil, Kurdistan Region, Iraq – (KRG.org) – Ban Ki-moon, the United Nations Secretary-General, visited the Kurdistan Region this week to discuss the Syrian crisis with Kurdish leaders and to visit Kawrgosik refugee camp near Erbil. During the visit, which is the first by a sitting UN Secretary General to the region, Mr Ban met with President Masoud Barzani and Prime Minister Nechirvan Barzani. He was accompanied by the Undersecretary-General for Humanitarian Affairs and Emergency Relief Coordinator, Valerie Amos, the UN High Commissioner for Refugees, António Guterres, the Special Representative Secretary-General for Iraq, Nickolay Mladenov, and a number of other senior UN officials. Mr Ban commended the Kurdistan Regional Government for its humanitarian work and spoke of how moved he was by the suffering of the Syrian refugees that he met.

The delegation was received on arrival by Prime Minister Barzani along with several other ministers and senior officials from the KRG. The Prime Minister welcomed the UN Secretary General and assured him of the Kurdistan Region’s continued support for the United Nations and its various agencies working in the region. During the meeting between President Barzani and the UN Secretary General, a number of critical issues were discussed, including the Syrian refugees in Kurdistan, the conflict in Syria, the preparations for the Geneva II Conference and the latest developments in relations between Erbil and Baghdad. Mr Ban praised the security, stability and development that the Kurdistan Region enjoys and thanked the KRG and the people of Kurdistan for hosting the Syrian refugees. He added that the UN plans to increase its humanitarian assistance to those refugees.

President Barzani welcomed the UN Secretary-General and said that the Kurdistan Region had opened its door to the refugees from the start of the conflict. He added that providing refuge to them was both a humanitarian and national obligation for the people. Due to large numbers of refugees, the Kurdistan Region is unable to adequately assist the refugees, said the President. He asked the UN and the international community to help the KRG meet its duty to help the refugees.
President Barzani expressed his hope that the Geneva II Conference leads to a positive outcome and that the refugees could return to their homes and the suffering of the Syrian people could end soon.

Turning to Iraq, the President reiterated that Iraq is governed by a constitution which defines both the relationship between the Region and Baghdad, and the rights and responsibilities of each side. “We are committed to this constitution which is a prerequisite for Iraq to remain united. We ask all sides to be committed to this constitution, and it is our policy to use dialogue to resolve our problems based on the constitution,” said the President.
President Barzani reaffirmed the KRG’s full support and cooperation with the UN and its agencies based in Kurdistan.

Mr Ban visited the Kawrgosk refugee camp in Erbil, accompanied by Minister Sinjari, where he said that he was particularly saddened to see so many young children, women and vulnerable people suffering in a ‘man-made tragedy’. ‘I am here to send our strong solidarity and support to all the refugees who came from Syria, on behalf of the United Nations and the international community. We are also here to listen to the concerns and aspirations of all the refugees here,’ Mr Ban said, recalling the people with whom he met in the camp. ‘Families shared their struggles to survive, find their loved ones and cope with the sadness of those who have been lost.’

The UN Secretary-General and Minister Sinjari were received at the Kawrgosik camp by the Governor of Erbil, Nawzad Hadi. Mr Ban commended the KRG for ‘its commitment to humanitarian principles in establishing refugee camps, transit sites and a humanitarian corridor to north-east Syria’.