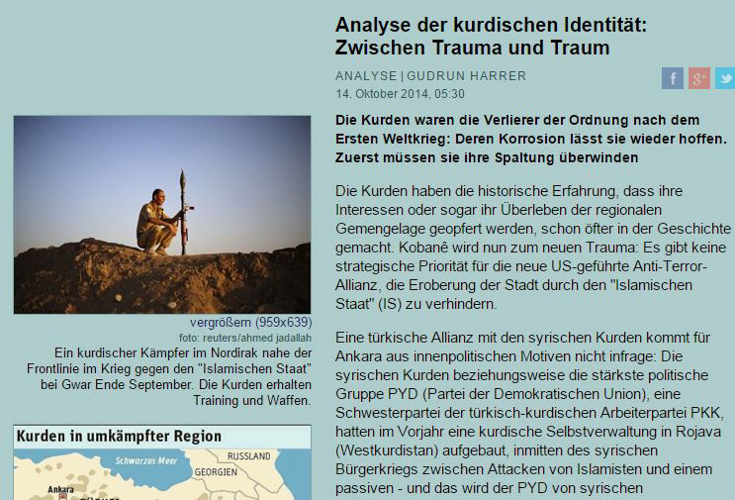 The Kurds were the losers of the world order that followed World War I: Its corrosion however allows for new hope. First, they have to find unity.

The Kurds have made the historic experience that their interests or even their survival is sacrificed in favour of the regional diversity of agendas more than once in the course of history. Kobanê is becoming the new trauma: There is no strategic priority for the US-led anti-terror alliance to prevent the conquering of the city through the “Islamic State” (IS).
A Turkish alliance with Syrian Kurds is out of the question for Ankara, for domestic political reasons: The Syrian Kurds, or rather their strongest political group PYD (Democratic Union Party), a sister-party of the Turkish-Kurdish worker’s party PKK, had erected Kurdish self-governance in Rojava (West-Kurdistan) in the year before, in the middle of the Syrian civil war between attacks of Islamists and a passive – and that is being held against the PYD by the Syrian opposition – Syrian regime. Nor does the PYD want that its territory gets occupied by Turkish troops; it simply wants support for their own fight. And on top of this, one has to add the Arabic suspiciousness towards the “neo-Ottoman” plans of Turkey.

Scattered over several countries
A hundred years ago, World War I started, which led to the collapse of the Ottoman Empire – and to the hopes of the Kurds for self-determination and a Kurdish state, which was outlined in the treaty of Sèvres of 1920 and rejected 1923 in Lausanne. Since then, they have been living scattered across Turkey, Syria, and Iraq – and also in Iran, where in 1946 the dream of Kurdish independence seemed to be fulfilled: The Republic Mahabad, by grace of the Soviets, existed for eleven months.

In Mahabad, Masud Barzani was born in 1946, today president of the Kurdish Regional Government in Northern Iraq. His father Molla Mustafa Barzani had been the most important Kurdish leader for decades, his Kurdish Democratic Party (KDP) with their several branches in different countries was the strongest political power. However, from the 1970s on, “leftist” competitors to Barzani’s traditional nationalist understanding of the Kurds arose: in Iraq, the KDP-spin-off PUK (Patriotic Union of Kurdistan), but particularly the Turkish PKK, which spread to Iran (PJAK) and later also to Syria (PYD).

Kurdish identity became victim to nationalist agendas in all countries: In Syria, Hafiz al-Assad – who nevertheless used the PKK against Turkey – revoked constitutional and civil rights of tens of thousands of Kurds. In Turkey, the Kurdish identity was criminalized. In Iraq, the initial promises of the Baath-regime, which had come to power in 1968, collapsed shortly after. When in 1975 Shah Reza Pahlevi put aside his conflict with Saddam Hussein and revoked his support to the Kurdish revolts in Iraq, the USA simply accepted it. In the 1980s, Saddam used the war against Iran for his extermination campaign, which peaked in the gas attacks of Halabja.

First Autonomies
In 1991, after the Gulf War, the USA intervened, when Saddam stroke down the revolts (which had been encouraged by Washington). The former protection zone became Kurdish autonomy. The first democratic experiment however went wrong: It lead to a civil war, where Barzani called Saddam’s troops into Kurdistan to fight against Talabani – who had asked Iran for help. The fall of Saddam in 2003 marked the turning point. Today, the Kurdish Northern Iraq is as close to independence as never before.

The regional ideological separation led to a fortification of the border to Rojava by Barzani, who had tried to unify all Kurds, and who did not welcome the Syrian Kurdish PYD-Autonomy. His relationship to the Turkish government however is so solid, that the Turks do not worry about an Iraqi Kurdistan – other than the Iranians, who feel more threatened by it than by the IS, because of its effect on Iranian minorities.

Weapons for the Kurds
Barzani needs Ankara to export oil – the Kurdish pipeline leads to the Mediterranean in Ceyhan. But also the oil in the territories that are disputed with Baghdad is, as the Iraqi Army ran away from the IS, under Kurdish control. Still, the Iraqi Kurds needed help against the IS in the summer: For the first time, a sort of Kurdish unity began to form again, also strengthened by Kobanê.

The USA is politically sworn in to a unified and intact Iraq: The help against IS was attached to the condition that the Kurds cooperate with the new government in Baghdad. The end could come quickly though, since the big problems between Erbil and Baghdad remain unresolved. What is different than before: The Peshmerga, faced with the IS-advance, have lost some of their nimbus; instead, they have received new weaponry.

For the original article (only in German available), click here.