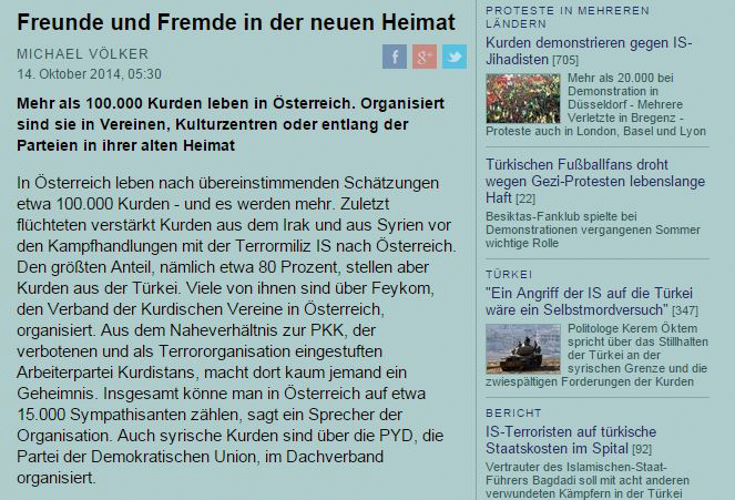 Der Standard: Kurds – Friends and foreigners in a new home

More than 100,000 Kurds live in Austria. They are organized in societies, cultural centres or via political parties in their original home countries.

According to concurring estimations, about 100,000 Kurds live in Austria – and the number is increasing. Recently, more and more Kurds from Iraq and Syria have fled to Austria from the war against the terror militia IS. The largest part however, namely about 80 percent, is formed by Kurds from Turkey. Many of them are organized via Feykom, the association of Kurdish Societies in Austria. The close relationship of Feykom to the PKK, the forbidden worker’s party of Kurdistan, which is classified as a terrorist organization, is an open secret. All in all, they could rely on about 15,000 sympathisers in all of Austria, said a spokesman of the organization. Syrian Kurds are organized via the PYD, the Democratic Union Party, which is part of the umbrella association as well.

When Feykom mobilizes for an event, up to 5000 Kurds are expected to come. People then also bring along flags and banners with an image of Abdullah Öcalan, the founder of the PKK who has been imprisoned in Turkey since 1999 – which happened in Vienna last week, as well as in other cities, at the solidarity demonstrations for the sieged Kurdish city of Kobanê in the North of Syria.

Alevis and Sunnis
Concerning religious affiliations, only very crude estimates exist. More than half of the Kurds in Austria are counted as Sunni Muslims, a third are probably Alevis. Alevis are organized via several societies and partially competing cultural centres. For Muslim Kurds only Wien-Fünfhaus and Graz offer separate mosques, all other religious Kurds visit Turkish or Arab mosques. The Yezidis from Syria and Iraq form a minority, which was targeted and hunted by the terror militia IS.

The second largest group according to their home country is formed by the Iraqi Kurds, who have been fostering good relations to Austria for decades. Masud Barzani, Head of the Kurdish Democratic Party (KDP) and President of the Autonomous Region of Kurdistan in Northern Iraq since 2005, has been visiting Austria frequently and privately. He maintains good relations to Federal President Heinz Fischer and other high ranking politicians. In 2012, the official representation of the Kurdish Regional Government-Iraq in Vienna was established, which has the character of a consulate.

Assassination
Also Iranian Kurds are well established in Vienna. However, the generally good relations were severely damaged, when the head of the Democratic Party of Iranian Kurdistan, Abdul Rahman Ghassemlou, his deputy and another Kurd were assassinated in a Viennese private apartment during a secret meeting with emissaries of the government in Teheran. The suspects first hid in the Iranian Embassy and could then leave the country unhindered.
Policymakers in Vienna have repeatedly been showing sympathy for the concerns of the Kurds. On Monday, the chairman of the SPÖ Andreas Schieder and the ethnic Kurdish parliamentarian of the Green Party, Berivan Aslan, announced that they would mutually travel to the Turkish border near Kobanê at the end of October, to get a picture of the local refugee crisis.

For the original article (only in German available), please click here.