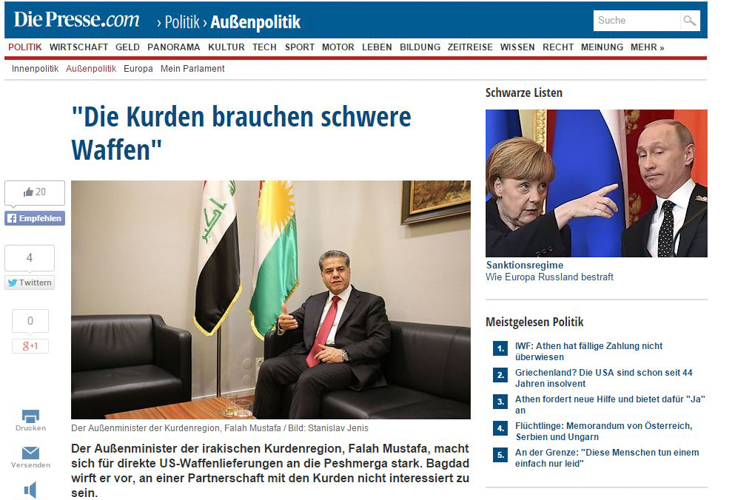 The Head of the Department of Foreign Relations of the Kurdistan Region-Iraq, Falah Mustafa, promotes direct arms supplies by the USA to the Peshmerga. He accuses Baghdad of not being interested in a partnership with the Kurds.

Die Presse: About one year ago, the so-called Islamic State (IS) proclaimed its “Caliphate”. Several weeks ago, IS conquered the city of Ramadi, and was also able to reenter Kobane. Was IS underestimated?

Falah Mustafa: IS is a terror organization, but it perceives itself as a state. It controls a territory and a population; it possesses resources and state structures, and it is still able to recruit fighters. After Kobane and the attacks in Tunisia and Kuwait it has to be clear: IS is a danger for all of us. It is the responsibility of the entire international community to stop it.

The President of Iraq’s Kurdistan Region, Massud Barzani, demanded in the USA that the Kurds are to be directly supplied with weapons. But Washington wants to continue providing arms solely to Baghdad.

The people in the Kurdistan Region are proud to be on the frontline in the fight against the IS. We fight for our nation and for values such as human rights and women’s rights. That is why we believe that we should not be left alone in the battle. Airstrikes and military advisors of the US-led alliance were helpful. But we need heavy weaponry and ammunition. President Barzani told President Obama: We need these arms in order to win this war, so that not more Peshmerga are killed in action just because of the lack of weapons.

So you still demand direct arms supplies from the USA?

That is our preference. If it is not possible, we want the process of arms distribution to be simplified. As it is now, we always have to find out first whether there has been a supply to Baghdad.

How does the Kurdistan Region deal with the economic challenges that arise because of the war against IS?

The frontline with IS is 1050 kilometers long. That is a great military challenge. Additionally, we are witnessing an influx of refugees and IDPs from Syria and the rest of Iraq. 1.8 million people came to the Kurdistan Region, which has merely 5.5 million inhabitants. We share electricity, water, and health care with them. Our infrastructure is overstretched. The costs to stabilize the situation of the people were US $ 1.4 billion in 2015. Our GDP growth shrank from eight to three percent. We became the home and the hope for minorities such as Christians and Yezidis, who have found a safe haven in Kurdistan. These people, who have suffered enormously, need assistance. My message to Austria and all our partners is: Help us, so we can help them! Then the refugees will not try to get to Europe any more.

Because of the economic problems, the Kurdistan Region wants to directly export its oil again. Will this not displease the government in Baghdad?

We did everything to support Baghdad. We supported the efforts of Iraq’s new Prime Minister, Haidar al-Abadi. We are standing at the frontline in the fight against IS. But our Peshmerga receive only half of the wages that Iraqi soldiers receive – and additionally these payments are three months behind schedule. We do not understand why Baghdad does not transfer Kurdistan its share of the budget. Baghdad does not stick to the budget agreement that we had concluded. That is why we have no alternative but to directly export crude oil. We need a partnership with Baghdad. But Baghdad does not accept a partnership.

Are there any new ideas for a referendum on independence in the Kurdistan Region?

We believe that the people in Kurdistan have a right to self-determination. President Barzani requested the parliament last year to draft a law on a referendum. The date is to be decided on. However, currently the main focus is on jointly countering IS.

In order to destroy the IS “Caliphate”, it has to be expelled from Mosul. When will this offensive begin?

We have to do it correctly: We need the Sunnis on board. And the troops have to be prepared. A defeat in the attempt to free Mosul would be a disaster. The leadership of the Kurdistan Region made clear that we are ready to play our role in the liberation of Mosul, if other forces are ready to do so as well. But first, we have to be clear about what happens the day after: Who will administer Mosul? How can the different groups live together in peace?

If Iraq’s army should not be ready: Would it be an option that the Peshmerga start an offensive against Mosul on their own – of course with air support by the US?

I do not believe that it would be a good idea if the Peshmerga tried it alone. It is important that the offensive is a joint Iraqi effort, in coordination with the International Alliance.

But the Sunni population of Mosul fears an invasion of Shia militias. And without those, Iraq’s army did not prove very effective so far.

We have to be very cautious – due to this power struggle between Sunni and Shia groups. The troops marching for Mosul must be composed of Sunni forces, Peshmerga, and Iraqi forces.

A year ago, the people of Mosul opened their gates for IS. How will these people be integrated?

They reacted to the treatment that they received from Baghdad. Baghdad must show a sense for responsibility. The capital must include Sunnis and give them the feeling that their future will be better than their present is now under the rule of the IS. There is a need for a national reconciliation plan, and we should also consider a Sunni Region.

Turkey threatens with a military operation in Syria. The operation is apparently also directed against the Syrian-Kurdish YPG-People’s Defence Units, which are allied with the Turkish-Kurdish underground organization PKK. The YPG in turn accuse Turkey of smuggling IS-fighters into Kobane.

I am not in the position to determine what has happened in Kobane. This is a highly dangerous situation. Turkey can play a major role in fighting IS. We hope that all our neighbours understand that we are in a common fight against IS – against a brutal terror organization. Kurds in Iraq and in Syria have shown that IS is not invincible. And to do so we need the help of our neighbours.

You say that in the fight against IS, all have to remain united. However, in the regions of the Yezidi, in the Sinjar Mountains, first tensions between the Peshmerga of the Kurdistan Region and the YPG have come up. Could this escalate to an open fight?

It will not come to an inner-Kurdish fight. There is no question about that. President Barzani has made clear that he would never let it come to this. Sinjar is a part of Iraqi Kurdistan. Peshmerga fighters have given their lives to defend the people in Sinjar and in other regions.

But also the YPG are saying that their fighters have sacrificed themselves for the Yezidi in Sinjar. And they therefore want to maintain their role in the region.

In turn, the Peshmerga have helped the YPG in Kobane. That is why I say: The fight against IS is a joint task. And we have to continue focussing on the common enemy.