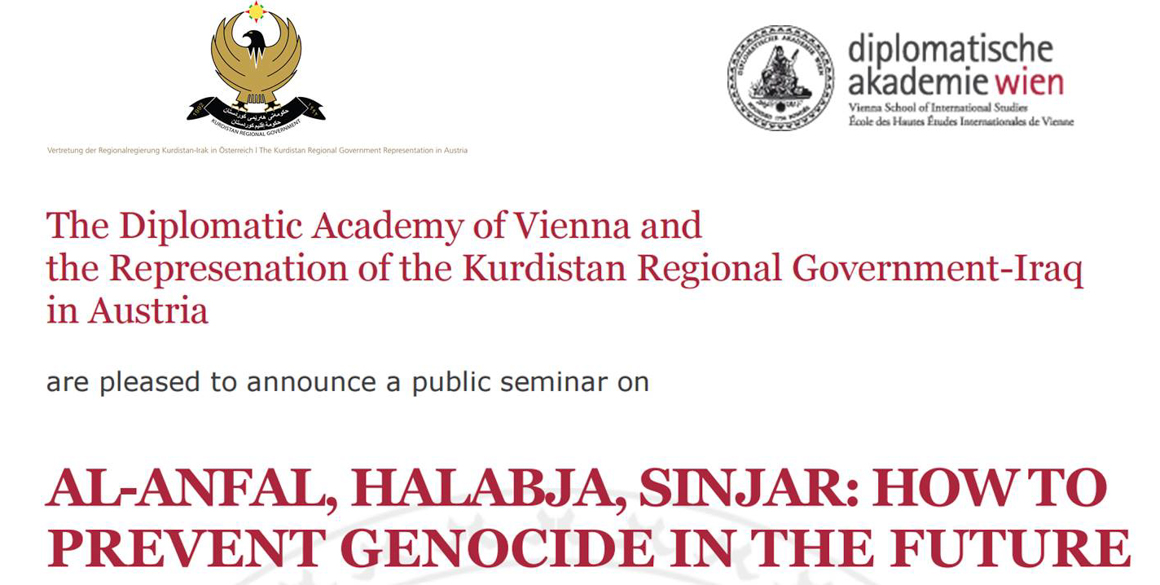 Only about 30 kilometers from the capital of the Kurdistan Region, Erbil, the front lines with the terror organization “Islamic State in Iraq and Syria”, ISIS (also known under the Arabic acronym “Daesh”), begin. Fights between the ISIS-terrorists and the internationally backed, Kurdish Peshmerga fighters are on the daily schedule. When the terrorists invaded Iraq in 2014, countless civilians were forced out of their homes. Those who did not flee had to face a gruesome fate. Because of their religion, the ethnically Kurdish Yezidi were hunted, enslaved and murdered.

Already 26 years before the rise of ISIS, Kurds had to face violence, deportation and extermination because of their non-Arab heritage. With modern war machinery and forbidden weapons – poison gas – the Saddam regime acted against civilians, to subdue the people of the Kurds.

The public seminar “Al-Anfal, Halabja, Sinjar: How to prevent Genocide in the future” establishes a connection between the individual cases of genocide. Is it possible to learn from the past, to prevent a repetition of history in the future?

Where: Diplomatic Academy of Vienna, Festsaal

Prof. Thomas Row, head of the history department of the Diplomatic Academy Vienna

Genocide committed by a state actor – the cases of Al-Anfal and Halabja:

Genocide by a non-state actor – the case of Sinjar:

The legal aspect of Genocide:

You can download the official invitation by the Diplomatic Academy here.