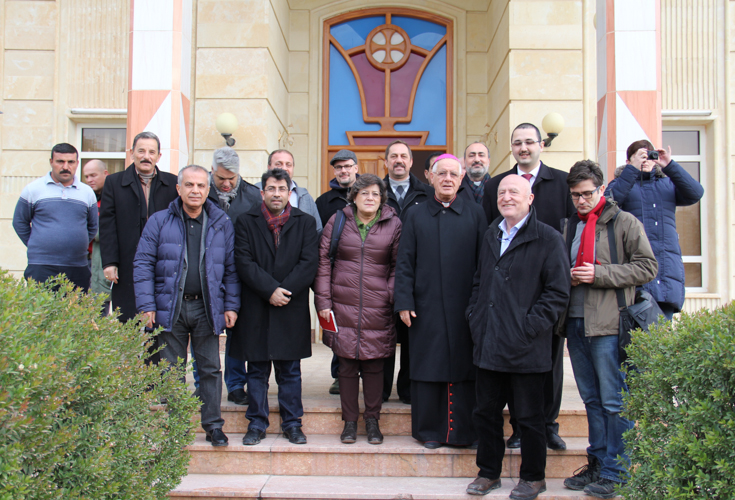 Last week, a delegation of the European Parliament headed by Austrian Josef Weidenholzer (Socialists and Democrats), German Cornelia Ernst (European United Left /Nordic Green Left), Dutch Marietje Schaake (ALDE), and Portuguese Ana Gomes (Socialists and Democrats) visited the Kurdistan Region in order to gain an insight into the humanitarian situation of refugees. The delegation was accompanied by parliamentarian staff, Austrian journalists and academics, and by the KRG Representative in Austria, Dr. Mustafa Ramazan.

In the Kurdistan Region, the delegation met with Dr. Fuad Hussein, chief of staff of President Massoud Barzani, with representatives of minorities of the Kurdistan Regional Parliament, and with the leadership of the Yezidis in the sanctuary of Lalesh. Moreover, the European parliamentarians were received by the mayor of the city of Dohuk, Farhad Atroushi, and visited the refugee camp Xanke, which provides shelter for 90,000 Yezidis, as well as IDPs currently living on the street.

Upon their return, all four delegates told of their impressions in personal reports and press conferences, and expressed their shock the acts of violence perpetrated by IS against religious and ethnic minorities.

On his blog, Josef Weidenholzer wrote about women and girls who had been kidnapped and were able to flee: “They were enslaved, sold like animals, abused and raped by their “owners”. Some were hardly older than ten. They had to experience terrible suffering which will affect them for the rest of their lives.”

Marietje Schaake described the fate of one individual: “A 17 year old girl recounts how she was sold countless times by jihadists and how every attempt to resist was met with torture.” Cornelia Ernst adds: “The women are heavily traumatized when returning to their families. They urgently need professional assistance, which they cannot get in Iraq. I ask that these women be able to come to Europe in order to receive the necessary medical and psychological treatment.”

The general humanitarian situation is described by Josef Weidenholzer as “very, very difficult, (…) Kurdistan has five million inhabitants and there are 1.6 million IDPs (“internally displaced persons”), next to 200,000 refugees from Syria, one can thus imagine how difficult the situation is.” Marietje Schaake calls the situation a “humanitarian disaster”. She explains: “In the refugee camps we see children with bare feet on the frozen soil. Small tents are inhabited by families with over 10 members”.

All four delegates call for a policy change and more support by the EU. In their joint press conference, Marietje Schaake requested an increase in financial resources, and further pressed those countries which have pledged but not contributed funds. Weidenholzer answered the question of a Salzburger Nachrichten journalist in regard to the necessary financial means: “I just want to mention one figure, which is currently a matter in the region: The football world championship in Qatar costs 12 billion euros, which can apparently be raised. Here (for Kurdistan, edt. note), we are speaking of 60 million in EU resources, and about 120 million additionally from the international community.”

Further demands were also voiced up by Cornelia Ernst, such as the recognition of the crimes against the Yezidis as genocide, the afore-mentioned assistance for traumatized women, as well as the active protection of minorities in Iraq by the European Union. Ana Gomes further added that Europe, particularly in view of the attacks of Paris, should provide a larger military contribution, and help free the more than 5,000 kidnapped women from IS and bring IS to the International Criminal Court.

The participants of the delegation found highly positive words for the Kurdistan Region. Josef Weidenholzer writes in his blog: “The autonomous Kurdistan Region is the outpost of a world in which human rights are constitutive. Here, the often misused term of the free world does have a fundamental importance. Because here, our freedom is being defended. (…) The solidarity among the local population is overwhelming. Without their generous support it would not have been possible to master this challenge.” Cornelia Ernst states: “Iraqi-Kurdistan in the only region to which the members of the different minorities as Christians, Yezidis, Shabaks can flee. Even if there is a lack of essentials, this can hardly be stressed often enough.”

Following, you can find the press conference of the delegates, as well as the link to the parliamentarians’ personal reports and selected media coverage of their trip.