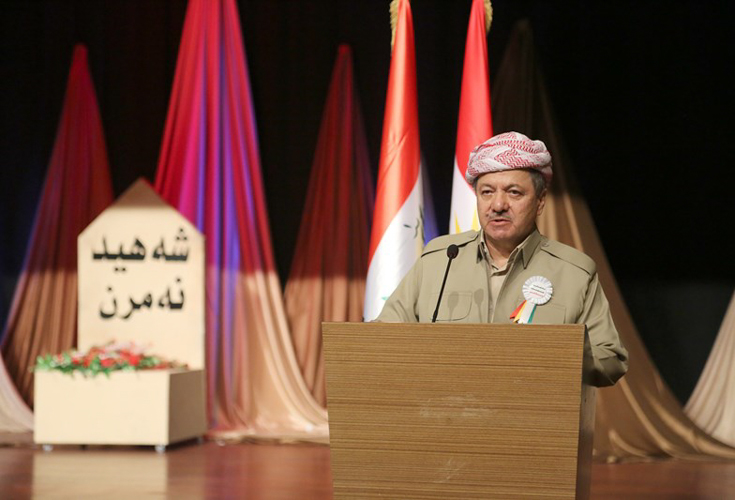 Anniversary Commemoration of the IS-Attack against Sinjar

Yesterday, August 3 2015, high ranking members of the Kurdistan Regional Government (KRG) commemorated the first anniversary of the massacre committed by the terror organisation IS against countless Yezidis in Sinjar. A year ago, more than 5000 Yezidis were either killed or enslaved by IS, and thousands more were forced to flee their homes. For days the displaced Yezidis were then besieged in the Sinjar Mountains, until the Kurdish Peshmerga forces, aided by aerial support of the Allies, managed to break through, free the refugees, and guide them to the Kurdistan Region, where they found protection from ethnic and religious persecution.

President Barzani repeated in his speech that the KRG will continue to provide shelter for the now overall 1.4 million IDPs and that plans exist to liberate the territories currently occupied by IS, to allow the refugees to return to their homes safely. “The terrorists fight against us without any humanity – we, however, will fight terrorism with our humanity”, emphasized the President of the Region.

The Kurdistan Region Council of Ministers also issued a statement in which the ministers urge the international community to recognize the massacres committed against the Yezidis as genocide and in which they express their hope for a quick liberation of the homes of the Yezidi refugees.

ISIS terrorists very violently attacked and occupied the town of Sinjar and nearby villages on 3 August 2014, killing significant numbers of innocent civilians of the area, particularly Yezidi Kurds, abducting and displacing scores of others.

On this anniversary, we express our deepest sorrow and condolences to the families of martyrs, victims of genocide.

The Kurdistan Regional Government, KRG, has been relatively successful in its efforts to liberate those Yezidi brothers and sisters who have been abducted by ISIS terrorists, and continues exerting great deal of effort to liberate those who remained in captivity.

The KRG meanwhile has been working and will continue to work restlessly for obtaining international recognition of Sinjar massacre as genocide. We will continue offering assistance to the internally displaced people who live now in camps in different areas of the Kurdistan Region.

Here, we would like to praise our courageous Peshmerga forces that heroically continue to liberate the areas that have been captured by ISIS terrorists. While KRG continues its assistance to the people of Sinjar, we hope that the town and nearby villages will soon be liberated entirely, allowing their people to return to their homes with respect and dignity.

The KRG announces two minutes of silence in all governmental institutions on 3 August 2015, to pay tribute to the soul of the martyrs and victims of Sinjar genocide.