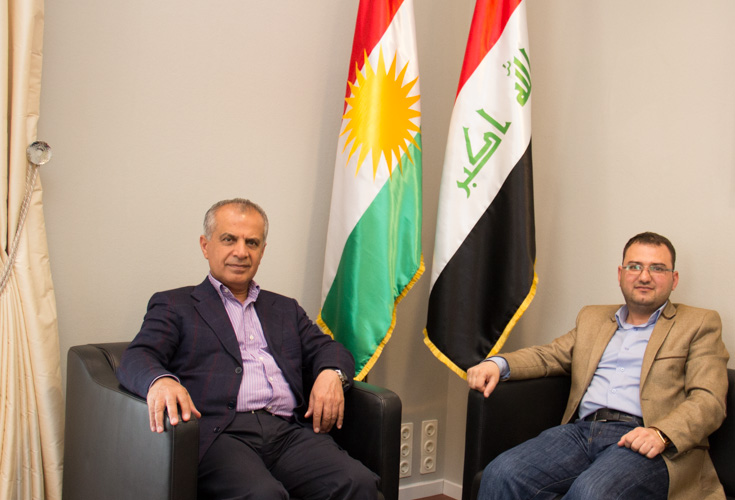 Aram Saleh Osman of the electoral commission for the Iraqi parliamentary elections on 30 April paid a visit to the Representation of the Kurdistan Regional Government-Iraq in Austria.

KRG Austria: Hello Mr. Osman. Thank you for being here today. Please introduce yourself and your occupation briefly.
Mr. Osman: My name is Aram Saleh Osman and I am the head of the Austrian section of the Iraqi electoral commission. The overall task of the Iraqi electoral commission is to enable Iraqi citizens to participate in the parliamentary elections from abroad. To this end, the electoral commission has established offices in 14 countries around the world, for instance in Iran, Turkey, Egypt, Jordan, the United Arab Emirates, the USA, Canada, and Australia. In Europe, the main representations are in Germany, Great Britain, and Sweden. Additionally, five local branches were established in France, Spain, Norway, New Zealand, and Austria.

KRG Austria: For how long have you been working for the electoral commission in Austria?
Mr. Osman: I myself have been in Austria since the beginning of March. Upon instruction from the electoral authorities in Iraq we contacted the Iraqi embassy in Austria. Together with the embassy, we discussed how many Iraqi citizens reside in Austria and her neighbours, and how these citizens are distributed across the countries. With an official letter which confirms the numbers provided by the Iraqi embassy we went to Germany. It was there that the electoral commission decided to establish one of its local branches in Austria.

KRG Austria: May Iraqi citizens from the Czech Republic, Slovakia, or Hungary, too, cast their votes here?
Mr. Osman: Yes, Iraqi citizens in these countries, too, can vote here in Vienna.

KRG Austria: How has the electoral commission informed Iraqis in Austria about the elections?
Mr. Osman: We have held a number of information sessions and seminars, and informed the local press. Furthermore, there were also information campaigns by the numerous representations of Iraqi parties in Austria. The Iraqi embassy in Austria and the KRG Representation, too, assisted us by passing on information material and by publishing it on their websites.

KRG Austria: Who assists you in the organisation of the local electoral commission?
Mr. Osman: We recruited several election workers from the local Iraqi community via a transparent application procedure with questionnaires and interviews in person. In this context, it is important to point out that the electoral staff in their tasks act independently from political parties. This is anchored in Article 102 of the Iraqi constitution, which holds that the Iraqi electoral commission is independent and is not subject any authorities other than the Iraqi parliament. Additionally, representatives of parties, media, and local and international organizations may send election observers.

KRG Austria: How does the voting process work, do Iraqi citizens who are entitled to vote need to register beforehand?
Mr. Osman: No, one simply needs to present valid documents at the polling station and will then be added to the voting register on-site. This list is constantly matched with the voting register in Baghdad.

KRG Austria: Which documents do I need to bring if I want to vote?
Mr. Osman: We distinguish between principal and secondary documents. Voters need to present at least one principal and one secondary document. A principal document is, for example, an Iraqi identity card, a proof of Iraqi citizenship, or a valid Iraqi passport, each containing a photo. Secondary documents can be Austrian documents, for instance a driving license, an electronic ballot, a residence permit, a UNHCR issued document, or refugee documents. For Austrians of Iraqi origins, it is necessary to present a proof of Iraqi citizenship of either of the parents.

KRG Austria: How exactly does the voting on the ballot work?
Mr. Osman: According to the electoral law, Iraq consists of 18 constituencies. The ballot looks as follows. In the header of the ballot, the 18 constituencies are listed, and to the right, there are the parties with their logos and listing numbers. On the left page, there are the numbers of the individual candidates – the numbers, not their names. Let’s take the example of an Iraqi citizen from Kirkuk. When he arrives at the polling station, he reports his constituency, Kirkuk in this case. This is very important, because he can only vote for parties and candidates in his own constituency. Then he chooses one party and, if he wants to, he can also cast a preferential vote for one candidate of this party.

KRG Austria: How do voters know which parties and candidates run in their constituencies?
Mr. Osman: The voters know because the parties, while campaigning, always prominently featured their listing number and the numbers of their candidates.

KRG Austria: Where is the polling station located in Austria, and at what times can voters cast their votes?
Mr. Osman: The polling station for Austria and the neighbouring countries is located at Mooslackengasse 17 in 1190, Vienna. Votes can be cast on Sunday, April 27, and Monday, April 28, from 9 a.m. to 7 p.m. on both days.

KRG Austria: Mr Osman, thank you for the informative conversation.