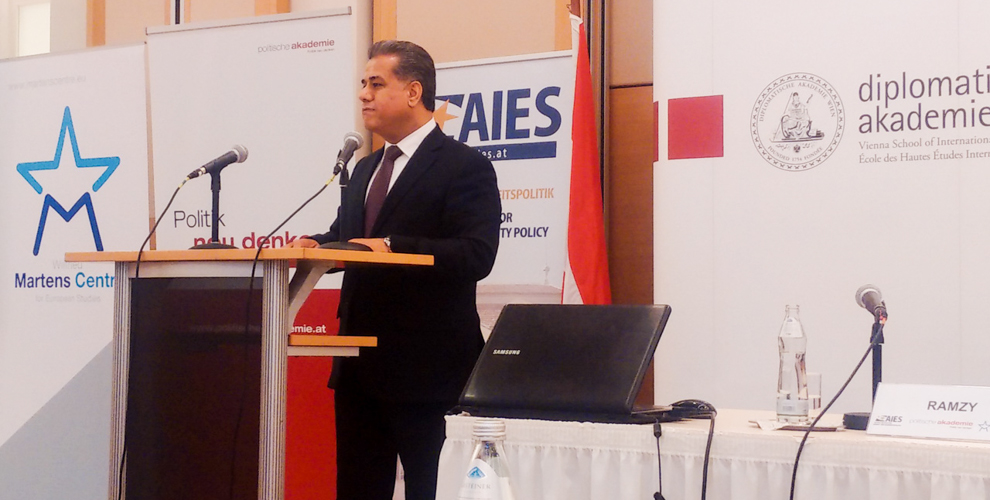 Minister Falah Mustafa Bakir, Head of the KRG Department of Foreign Relations, yesterday spoke about strategies in the fight against ISIS and the humanitarian and financial crisis the Kurdistan Region is facing, at the 19th annual European Forum on Foreign and Security Policy at the Diplomatic Academy of Vienna.

The forum, which is organized by the Austrian Institute for European and Security Policy (AIES), brings together high-ranking policymakers, diplomats and the defense community. This year’s event was held in the context of the developments in Ukraine as well as the ongoing crisis in the Middle East and its consequences for Europe. The forum was opened by Ambassador Dr. Michael Linhart, Secretary General of the Austrian Ministry of Europe, Integration and Foreign Affairs and former Austrian defense Minister Dr. Werner Fasslabend, President of the AIES.

In his keynote speech Minister Bakir outlined the KRG’s position in its fight against ISIS, the humanitarian crisis as well as the recent developments in Syria and the rest of Iraq. The Minister emphasized the courageous role that the Peshmergas fulfill, but reminded how costly this war has already been with more than 1,300 martyrs and many thousands wounded, mostly through the use of IEDs.

The KRG Minister said: “The fight against ISIS is a global issue and not isolated to Syria or Iraq and the regional actors and global powers need to acknowledge this fact and act swiftly and decisively. In order to defeat ISIS, we need a multi-faceted approach, not limited to military options, but incorporating politic and economic measures as well.”

Minister Bakir reiterated that the Kurds fight in the forefront and are a reliable partner to the West. But the Peshmerga forces desperately need more and better weapons and ammunition as well as protective equipment to effectively counter the threats of IEDs and recent chemical attacks and further push back ISIS.

With regard to the humanitarian crisis, Minister Mustafa emphasized, “We are very proud of the Kurdish people who have opened their arms and hearts to host over 2 million refugees and IDPs. But our capacity has been stretched far over its limit and we call on the international community to help us here directly to solve this crisis at its roots in the region. The cost of action now is much smaller than the cost of inaction and the consequences it would bring about.”

During the Q&A session that followed the speech of Ambassador Ramzy Ezzeldin Ramzy, UN Deputy Special Envoy for Syria, the Minister also highlighted the question about the future relationship of the Kurdistan Region with Iraq as well as the importance of the liberation of Mosul for the defeat of ISIS. The Minister also called on the international community to recognize the successful role that the Kurdish Peshmerga are playing in the fight against ISIS, stating while the Kurds are fighting on the frontlines, they also deserve to have a voice at anti-ISIL coalition meetings from which they have been excluded in the past.

Minister Bakir concluded his remarks by giving a positive outlook: “We as a people in Kurdistan are optimistic. We experienced a difficult and dark chapter of history under the regime of Saddam Hussein but we never lost hope. And we have a positive attitude toward the future of the Kurdistan Region and firmly believe that the fight against ISIS can and will be won soon.”