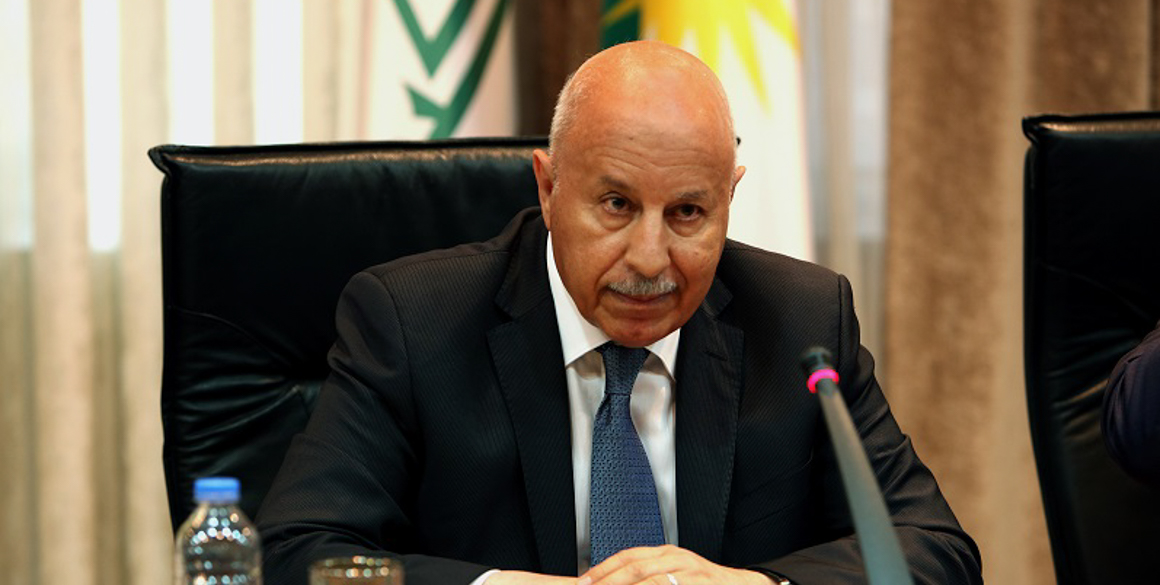 The KRG is calling for immediate, direct assistance to minimize a humanitarian catastrophe as a result of a lack of proper shelter and medical care for civilians fleeing Mosul. The KRG has not only supported and hosted fleeing IDPs, but also provided leadership in planning humanitarian response and advocacy for resource mobilization. The purpose of this message is to alert the international community of an impending humanitarian catastrophe and to request additional resources to be provided immediately to deal with the increased burden.

The Kurdistan Regional Government (KRG) is struggling to absorb and care for tens of thousands of Mosul residents fleeing the ongoing operations to liberate the city from ISIS terrorists, in addition to the 1.8 million people who had previously fled. The dramatic increase in the volume of critically injured people has flooded Kurdistan Region’s hospitals, and is overwhelming the Region’s already strained healthcare sector. Conducting adequate security screenings for incoming internally displaced persons (IDPs), as well as maintaining internal security for cleared IDPs, is a responsibility that is growing rapidly in size and complexity and will soon surpass the KRG’s technical and personnel capacities.

Since the start of the operations on 17 October 2016, as of 28 January 2017, over 195,000 individuals have fled Mosul city and its periphery. The KRG’s latest data show that more than 96,000 individuals of these recently displaced people have arrived and are being cared for in Erbil and Duhok.

As military planning and preparations are underway to launch the offensive to liberate the west side of the Mosul city, it is estimated that half a million people are still living in ISIS-controlled Mosul and it is anticipated that the majority of them will flee and need the lifesaving assistance. Even, the eastern side liberated, displacement is still ongoing and on daily basis people are arriving KRI due to the dire humanitarian and security situations.

The Kurdistan Region today hosts more than 1.8 million; 97% Syrian refugees and 40% internally displaced Iraqis, as a result of the war in Syria, the genocide by ISIS, and the ongoing operations to liberate territory from the terror group.

The displaced have arrived in Kurdistan Region destitute and often with both physical and emotional wounds. Prior to the Mosul operation, hospitals throughout the Region were flooded with refugees and IDPs, who treat those in need without discrimination and at no cost to the individual.

KRG Peshmerga troops have liberated tens of thousands of square kilometers from ISIS, including strategic towns and roads which laid the groundwork for the Mosul offensive. These gains were made at great expense, with 1,600 Peshmerga killed and nearly 10,000 seriously wounded. At the same time, a financial crisis has crippled the region, resulting from the cost of the war and humanitarian crisis, the crash in oil prices, and the federal government’s unconstitutional decision to withhold Kurdistan’s share of Iraq’s federal budget.

As a result, KRG employees, who make up the bulk of the work force, have experienced delays in their salaries and cuts to benefits and pensions. This has had a profound, negative effect on frontline Peshmerga soldiers and civil servants involved in assisting the humanitarian crisis. Additionally, the unemployment rate has increased by threefold from 3% in 2013 to 14% in 2016.

Kurdistan Region’s hospitals are already unable to provide sufficient care for the influx of injured Iraqi Security Forces and Peshmerga, as well as thousands of civilian IDP casualties. There are simply not enough intensive care units, recovery beds, and medical supplies to absorb all cases. Since the military operations on 17 October 2016, over (10340) injured civilians have been transferred to the hospitals in Kurdistan Region; (2340 Duhok governorate and 8000 Erbil governorate). This is apart from the huge number of wounded Iraqi soldiers and peshmarga forces. Without immediate international assistance to build the capacity of Kurdistan’s medical care, we could be heading towards a catastrophe.

The difficulty in caring for the influx is compounded by an ongoing financial crisis and the insufficient medical supplies being sent by the federal government. The financial crisis has left the KRG struggling to pay salaries of public servants, which is having a negative effect on medical professionals in the region. Qualified medical personnel are unable to work long hours required to support massive influxes of IDPs. 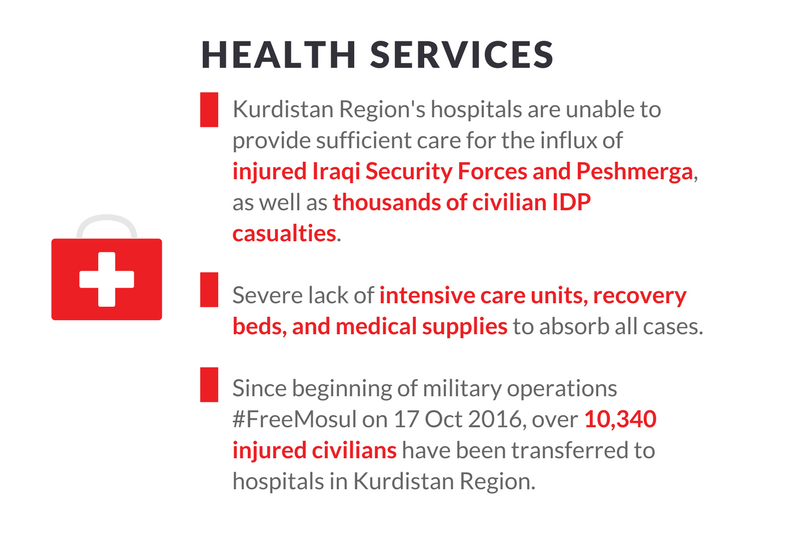 With the support from the Iraqi Ministry of Migration and Displaced (MoDM) and UNHCR, the KRG has constructed 5 emergency camps for new arrivals from Mosul in Duhok and Erbil. The finished emergency camps are already fully occupied and accommodated over 26,000 families, 96,000 individuals; with support from the MoDM and partners, five additional emergency camps are being finished to create more space for the continuous flow of IDPs from Mosul.  KRI can only receive around 10,000 more of displaced families, once all camps finished. Even, the eastern side of Mosul city liberated, displacement continues due to the dire humanitarian and security situation, daily over 1000 individuals are fleeing and more than half resorting to KRI. Without international support, hundreds of thousands of IDPs will sleep rough through the cold winter months and beyond, causing inconceivable suffering and loss of lives.

Furthermore, despite having prepared a Joint Humanitarian Contingency Plan in June 2016 for Ninewa and constant calls for support to Baghdad, UN agencies, and donors, the KRG has not received any direct financial support to care for Mosul’s injured. Today the KRG covers all operational, administrative, protection and security costs of the camps and reception centres, totaling more than 3.5 million USD monthly. The KRG has been providing several essential services to IDPs; continuing to provide support at the current level requires direct financial and technical assistance from international partners. 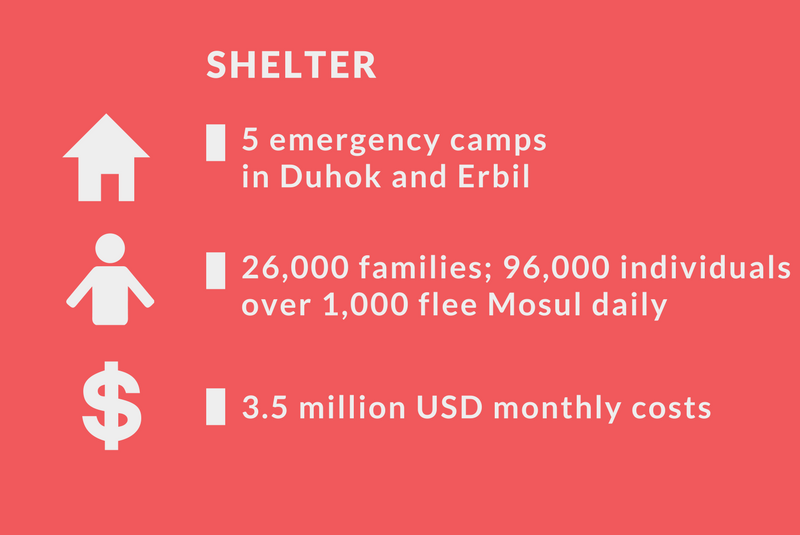 In cooperation with the Government of Iraq and humanitarian partners, the KRG upholds the humanitarian principles of impartiality in protection and continues to support the well-being of displaced people, including providing safe passage to civilians fleeing the battlefield to reach safe areas. Peshmerga troops have liberated thousands of square kilometers from ISIS, and have secured, cleared, and repopulated dozens of villages in Nineveh.

Recent IDP arrivals from Mosul have lived under ISIS rule for more than two years, and our assessments suggest ISIS is attempting to infiltrate Kurdistan through them. Consequently, arriving IDPs must be properly screened before they are permitted to enter displacement camps in Kurdistan. This task is complex and time-consuming, and as IDP influxes increase, KRG security services are concerned that it will overwhelm their capacity.

In addition, ISIS’ campaign of genocide in Iraq shattered trust among local communities, particularly between the numerous ethnic and religious groups who lost their homes to the terror group. As a result, the potential for a conflagration of retaliatory and revenge attacks between groups is very high. Preventing this is our priority but it needs international assistance.

Since the start of violence in Syria began displacing people to Kurdistan, the KRG has been on the front lines of sheltering and caring for displaced people. Today, Kurdistan hosts more than 1.8 million displaced Iraqis and Syrians, representing a 32% increase in the region’s population.  The operations to liberate Mosul have displaced (195,000) people and this number is increasing daily. The responsibility to care for them is shared by the KRG, the GoI, and the international community.

The KRG has not only supported and hosted fleeing IDPs, but also provided leadership in planning humanitarian response and advocacy for resource mobilization. The purpose of this message is to alert the international community of an impending humanitarian catastrophe and to request additional resources to be provided immediately to deal with the increased burden. 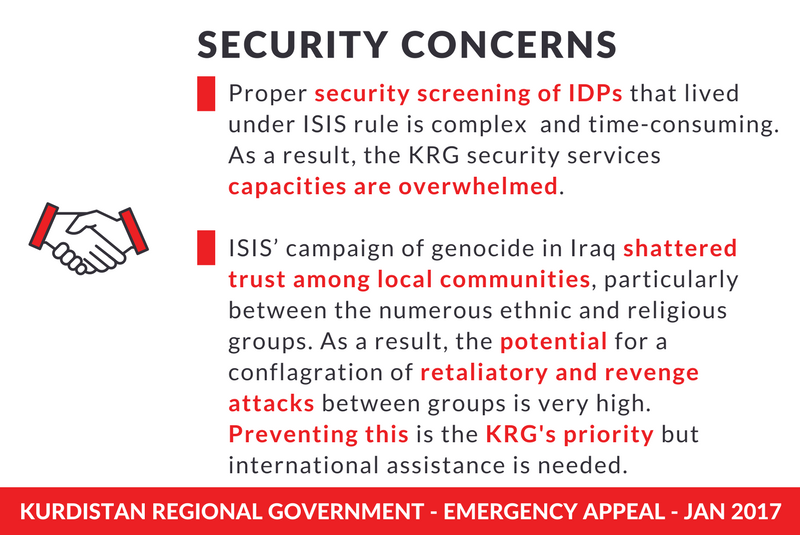 I call upon all partners, the Iraqi government and all donor countries and members of the International Coalition to act with urgency in providing funds and material and technical assistance directly to the KRG to mitigate risks and minimize human suffering. Urgent financial support is critical for KRG institutions to respond effectively and efficiently to the massive humanitarian emergency that continues to unfold.