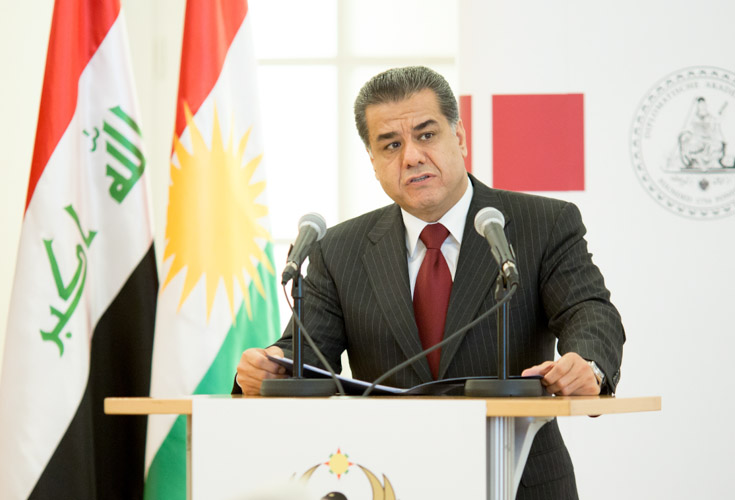 Minister Falah Mustafa, Head of the KRG Department of Foreign Relations, gave the keynote address for a panel discussion entitled “The Kurdistan Region of Iraq: Achieving stability in a time of transition” on Friday June 15, 2013 at the Diplomatic Academy of Vienna.

To provide a background on the KRG’s stance on many complex issues facing the Kurdistan Region today, Minister Mustafa highlighted the history of the Kurds and their struggle for universal rights, “We will continue to utilize every political tool at our disposal to achieve a federal government of true partnership that is based on the federal constitution. However, we will not become a part of a return to the old Iraqi tradition of centralized power and authoritarianism. We in the Kurdistan Region have come too far, and suffered for too long to allow this to happen.”

“I want to be clear here – especially to those who often refer to Kurds as ‘separatists’. We had a choice in 2003, and there were many among us who wanted to take the moment to declare our independence. But our leadership believed that our most reasonable course was to remain part of a new democratic and federal Iraq. That commitment still exists today, but it depends completely on the character of the new Iraq, and whether our constitutional rights and freedoms are respected by the Iraqi government,” added Minister Mustafa.

The event also included a panel discussion between Minister Mustafa, Ms. Maria Fantappie, a visiting scholar at the Carnegie Middle East Center in Beirut, and internationally renowned political analyst Mr. Joost Hiltermann of the International Crisis Group. The aim of the discussion was to increase awareness on the transitions occurring in relation to the Kurds in the Middle East. The discussion was moderated by Dr. Cengiz Günay, a research fellow with the Austrian Institute for International Affairs (OIIP).

This was the first official event to be jointly organized and hosted by the newly opened KRG Representation in Austria. The Representation cooperated with the Austrian Institute for International Affairs, a prominent Austrian think tank, and the Diplomatic Academy of Vienna.

Minister Mustafa also spoke about the tremendous growth that Kurdistan has witnessed in recent years, saying: “Since the formation of our regional government, and especially since the fall of the dictatorship of Saddam Hussein, we have seen progress in all aspects of our daily life. Health care, education, electricity, agriculture, roads, housing, shopping centres, and general infrastructure have been dramatically improved, and continue to be developed.”

Commenting on the discussion, the KRG Representative to Austria, Dr. Mustafa Ramazan, remarked, “Hosting events such as this panel discussion are important for facilitating dialogue and cross-cultural understanding, which is essential for gaining an appreciation of the realities that the Kurds face. I believe we were able to achieve that here today with our international panellists and look forward to continuing the on-going dialogue between our peoples.”

The event, attended by members of the diplomatic, academic, and business communities, completed a three-day visit by Minister Mustafa for the official opening of the KRG Representation in Austria.

Ms. Fantappie specializes in Middle Eastern affairs with the Carnegie Middle East Center of the Carnegie Endowment for International Peace. Her work includes special emphasis on Iraq and the Kurds. Mr. Joost Hiltermann is the Deputy Program Director for the Middle East & North Africa at the International Crises Group, an independent non-governmental organization dedicated to conflict prevention. Much of his work focuses on the political and constitutional developments in Iraq and how it relates to the Kurdish question.