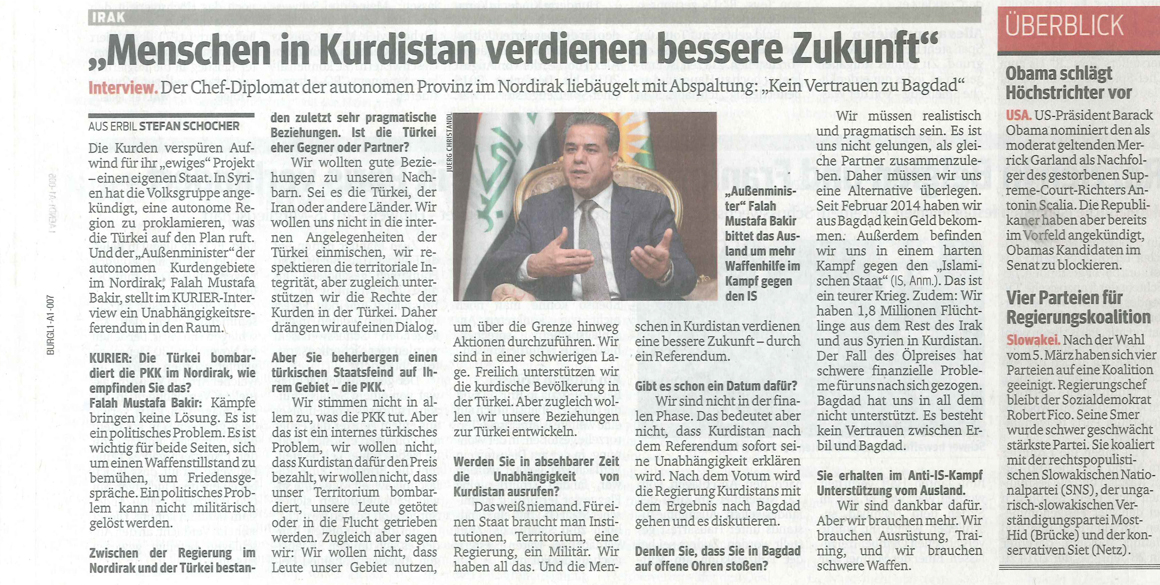 Falah Mustafa Bakir, the leading diplomat of the autonomous province flirts with secession

KURIER: The Turkish air force continues to drop bombs on the PKK in Kurdistan – what are your thoughts about this?
Falah Mustafa Bakir: We believe that it is in the interest of peace and stability to keep the truce and to continue with the peace negotiations. Because we saw that fighting does not lead to a solution. And the continuing military actions, the continuing violence will not solve this problem. It is a political problem; I think that it is important for both sides to work for a truce, for peace talks, for dialogue. History has shown us: When there’s a political problem, it cannot be solved militarily.

What kind of neighbor is Turkey? In the past months the relations between Turkey and the Kurdistan Regional Government were very pragmatic. Is Turkey rather an opponent or a potential partner?
We at the Kurdistan Regional Government have a very special view on the situation. We live in a very difficult region. Nonetheless, we always wanted to establish good relations with our neighbors. Relations based on respect, understanding and mutual benefit. We practice open-door politics with our neighbors, to establish communication bridges and trust and especially to create sustainable bilateral relations, which are of benefit to both sides. We always regard our neighbors as important – be it Turkey, Iran, or other countries. The point is: We live in the same region, we cannot change this fact, they cannot change it – which is, why it is so important to find a mutual basis. But the point is: When you are talking about the situation in Kurdistan, then we are talking about the situation in Iraqi Kurdistan. When we talk about the Kurdish situation in Turkey, then we are talking about Turkey. Our political strategy is clear: We do not want to interfere in the internal matters of Turkey, we respect their territorial integrity, but at the same time we support the rights of the Kurds in Turkey. Hence we push for dialogue between the two sides – because dialogue would benefit both sides.

So if you say, loosely translated, that one has to tackle the situation in the region pragmatically, then Turkey could say: You are harboring an enemy of the Turkish state on your territory – the PKK. How would you describe the relations between your administration and the PKK?
We do not agree with everything the PKK does. We have our disagreements. But we say that violence is not a way to solve problems. Therefore, our message is: This is an internal Turkish problem, we do not want Kurdistan to pay the price for it, and we do not want that our territory gets bombed, that our people get killed or that they are forced to flee. Nonetheless, at the same time we say: We do not want that people use our territory to execute actions across the border. We are in a difficult situation. Of course we support the rights of the Kurdish population of Turkey. But at the same time we want to develop our relations to Turkey.

The current situation in the region provokes the idea that the time is quite ripe to formally declare independence. How far away of this step is the Region?
Nobody knows the answer to this question. But, to be specific, a state needs institutions, a territory, a government and a military. You have to prove to the world that you can protect yourself and that you can establish relations to your neighbors. We have all of this. And the people in Kurdistan deserve a better future. But this future must be created in times of peace, through a referendum, in which the people can decide how their future should be.

This referendum has been mentioned again and again – do you have a date for it?
President Barzani said very clearly: It needs a clear decision of the government about the content, the date, but that does not mean that Kurdistan will immediately declare its independence after the referendum. Our position is clear: We want to understand what the people want. After the referendum the Kurdistan Regional Government will take the outcome to Baghdad and begin discussions. We have not yet reached the final phase before the referendum, but we are serious.

Do you think that you will find approval for the referendum in Baghdad?
We have to be realistic and pragmatic. We did not manage to live together as equal partners. Hence, we have to think about an alternative. Since February 2014 we have not received money from Baghdad. This neither corresponds to Iraqi laws, nor to our constitution. Nonetheless they did it. Secondly, we are in a fierce war against ISIS. It is an expensive war. Thirdly, we shelter 1.8 million refugees from the rest of Iraq and from Syria in Kurdistan. The collapse of the oil price created heavy financial problems. So when we started talking about a referendum, we already had to admit that Baghdad does not view us as partners. We are not part of the decision making process in this country. Therefore, we must be realistic. Either we implement the constitution as it is or we agree on a different formula that provides the basis for better coexistence. IDPs, war against IS, the collapse of the oil price – Baghdad did not support us in any of these cases. This situation cannot continue forever. We cannot go on like this. We have to establish proper relations – be it in a federation, in a confederation, or through independence. One condition applies however: There must be a consensus.

On the other hand it is quite remarkable that a lot of help from abroad – be it militarily or humanitarian – is being directed into the region directly.
Some states decided to be in the one place, others to be somewhere else. We are grateful for that. We do not receive anything directly – everything has to go through Baghdad. All states that operate here do so via Baghdad.

So, you would not say that foreign support amounts to a factual recognition of Kurdistan?
We would prefer, if we received weapons and ammunition directly. But everything has to go through Baghdad. And that is the problem, which we are facing: There is no trust between Erbil and Baghdad.

Is there enough support from abroad?
We are grateful for it. But we need more. We need equipment; we need training, heavy weapons. We are in dire need. Still, at the same time we are proud of our Peshmerga. The whole world should be proud of them. We did not ask for boots on the ground. We have the fighters, who can win this war.

Would Kurdistan welcome foreign troop contingents, maybe from the West?
We did not ask for it. But as I said, if the states do not want to send troops, then at least supply us with the weapons that we need to win this war.

The military support that the Region receives also comes from Turkey: How do you perceive this engagement?
This is a shared responsibility. Terrorism is a threat to us all and no country is immune. Therefore, the more coordination there is the better. It is not just a war that is being fought on the frontlines. We have to defeat IS economically, ideologically and culturally. States have to cooperate to do so – IS is international.

Do you think that Turkey chooses the right enemies in their fight against terrorism?
In regards to us, Turkey is here for a training mission with Peshmerga. This is an important engagement. And there exists mutual interest.