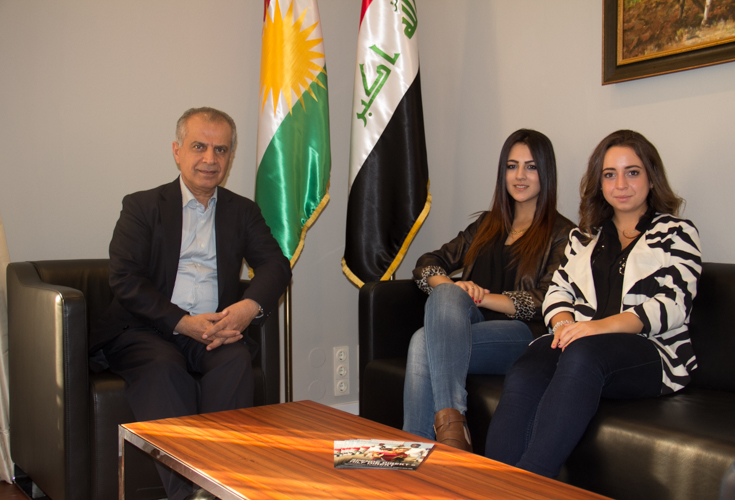 On Thursday 25 September, the Representative of the Kurdistan Regional Government in Austria, Dr. Ramazan, met with Austrian high school student Ms. Didar Shwan, the founder of the fundraising campaign “Give Families Hope”, to commend her and her friends on the progress of their campaign.

“Thus far, the campaign is working very well. However, we require more financial resources to satisfy the needs of the people outside of Erbil”, she explained during her conversation with Dr. Ramazan.

Representative Ramazan applauded the girls for their effort saying, “I consider it remarkable when teenagers show such active engagement. Ms. Shwan initiated a great campaign, which we gladly support along with other Kurdish institutions and community groups”.
“Give Families Hope”, an Austrian-Kurdish Student Initiative, was established in early September to provide humanitarian assistance to the refugees in the Kurdistan Region. Over 1.5 million refugees were forced to flee their homes in the wake of the terror of IS. The KRG and local NGOs are providing shelter and food to as many refugees as they can. Still, despite the efforts of the Kurdistan Region, resources remain scarce.

Due to lack of space in the refugee camps, many of the families are now living in schools, construction sites, and on the streets. There is limited, and in some cases, no access to clean water or food. With a population of 5 million, the Kurdistan Region cannot properly deal with this emergency alone.

Ms. Didar Shwan and her friends decided that they too needed to contribute to the humanitarian relief. Their campaign “Give Families Hope” is currently collecting funds to donate directly to the refugees who need it most in the Kurdistan Region.

To make a generous donation to the fundraising campaign “Give Families Hope” and find out more information about this campaign, please click on the following link: