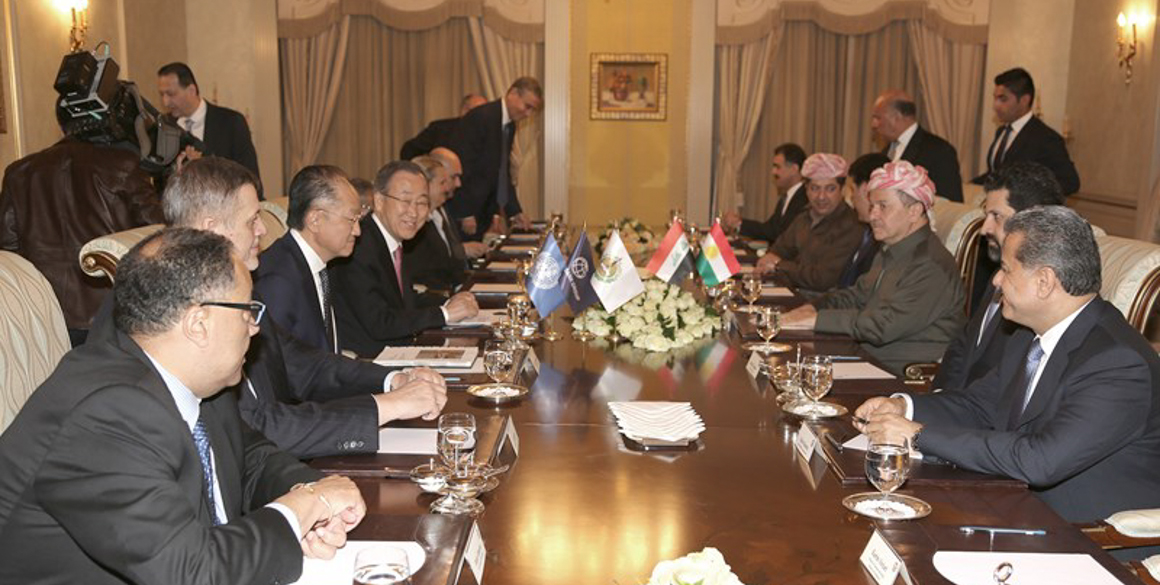 President Barzani described the visit as important and a source of hope and support for the people of Iraqi Kurdistan. He explained the challenges the Kurdistan Region currently faces, most notably a fierce war against terrorism and a severe financial crisis, as well as the accommodation of an extraordinary number of internally displaced persons, IDPs, and refugees.

Moreover, the President stated that the Kurdistan Region has not received any financial support from Baghdad to ease the impact of the crisis, and the Iraqi Government has not fulfilled its promises to help support displaced persons.

Barzani further highlighted the reform programme recently undertaken by the Kurdistan Regional Government, stressing that the government is committed to taking all required steps necessary towards its full implementation.

The UN Secretary-General explained that he came to confirm the support and sympathy for the people of Iraqi Kurdistan, praising the leadership of President Barzani in the fight against ISIS and the bravery of the Peshmerga. He noted that in spite of a severe financial crisis the Peshmerga forces are in the forefront of defending the world against terrorism.

The UN Secretary-General also thanked the people and the government of the Kurdistan Region for hosting hundreds of thousands of displaced persons who fled ISIS terrorism and took refuge in Iraqi Kurdistan.

The World Bank president briefed President Barzani about the assistance the World Bank can offer to Iraqi Kurdistan. He expressed satisfaction with the reform programme adopted by the KRG and stressed that it should be supported.

The Islamic Development Bank president noted that the bank is keen to support Iraqi Kurdistan in its reform programme, help displaced people and work to assist them in returning to their liberated areas.

At the end of the meeting, President Barzani described the UN Secretary-General as a close friend of the people of Iraqi Kurdistan and thanked the UN teams for their work in Kurdistan Region.