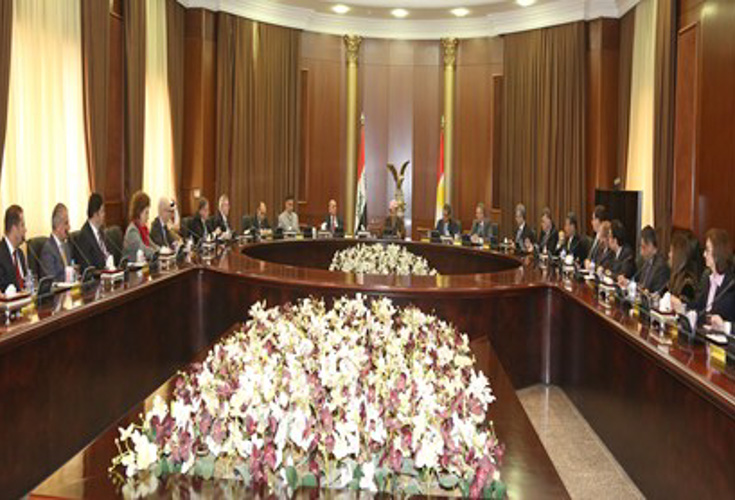 At the outset of the meeting, the Head of the KRG Department of Foreign Relations, Falah Mustafa briefed President Barzani about the priorities and activities of the Department of Foreign Relations including enhancing relations and cooperation with the foreign diplomatic representations in the region. Minister Mustafa added that the KRG is constantly working to improve and expands its ties with the international community. ‘The number of foreign diplomatic representations is constantly growing and we will soon witness the opening of the consulates of China, Kuwait and Bulgaria, and with this the number of foreign diplomatic representatives will increase to 29. In collaboration with diplomatic missions, we have managed to increase the number of commercial flights between the Kurdistan Region and the outside world.’

In his remarks to this annual gathering, President Barzani wished the members of the diplomatic corps a Happy New Year and then shed light on a number of key issues facing Iraq and the Kurdistan Region, particularly the efforts currently underway to form the new KRG government, the crisis in the Anbar province, relations between Erbil and Baghdad, and participation of the Kurds at the upcoming Geneva II conference on Syria. ‘We know that the government formation process has taken longer than we expected, but we wanted to form a broad-based government that included all political sides. We want to form a government that will maintain stability and calm and provide services to the people, a government that will lead to four years of harmony and development,’ said President Barzani.

Regarding the latest security situation in the Anbar province of Iraq, President Barzani said, ‘We are concerned about the security situation in Iraq and particularly in Anbar. This crisis is the result of an accumulation of problems which the Iraqi government should have addressed in the past. There is a danger that this crisis may spread to other provinces. We believe that the intervention of the Army will probably make the crisis more complicated.’ The President added that the Iraqi government must respond to the legitimate demands of the people Anbar and prevent the fight against terrorists from turning into sectarian strife between Shiites and Sunnis.

Regarding ties between Erbil and Baghdad, the President said: “There has been an exchange of visits and currently talks are underway between the two sides to reach agreement on the outstanding issues, including on Article 140, on funding for the Peshmerga forces and on oil and gas. We are ready to play a role in addressing the challenges facing Iraq, but it is important that no side is marginalized in the political process.” He also expressed his hope that the planned Iraqi parliamentary elections are held on time in April of this year.

President Barzani also talked about the humanitarian situation of the Syrian refugees in Kurdistan and the participation of Syrian Kurds in the planned Geneva II conference. ‘There are now more 250,000 Syrian refugees in Kurdistan. In addition to this, there has been an increase in the number of internal refugees from Anbar province, as well as the thousands of Arab and Christian families which have sought refuge in the Kurdistan Region in the past. All this has put a lot of strain on the KRG resources and we ask the international community to assist us in hosting these large numbers of refugees.”

At the end of the meeting, a question and answer session followed, and diplomats had the opportunity to ask specific questions of the President.