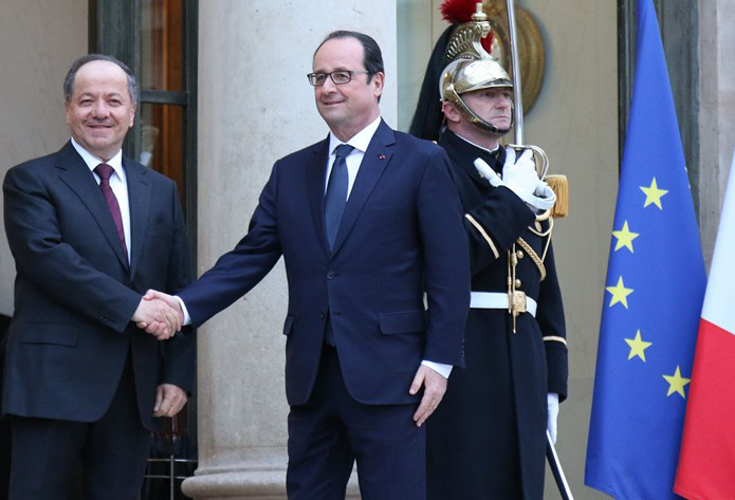 President Hollande welcomed President Barzani’s visit to Paris and reiterated his country’s support for the Kurdistan Region, in particular the peshmerga forces. He praised the role of the peshmerga in taking the fight to the ISIS terrorists. Hollande said France would continue to provide military, humanitarian and political support to Kurdistan, and that it would also seek to gather support for Kurdistan among other European countries.

President Barzani thanked President Hollande for his continuous support and France’s aerial support for the peshmerga forces. He stated that President Hollande’s visit to Erbil in September was very important and showed that our people have close friends.

The two also discussed joint preparations underway by the peshmerga and the Iraqi army to liberate the city of Mosul from ISIS terrorists. Furthermore, they discussed relations between Erbil and Baghdad and the recent meeting between President Barzani and Iraqi Prime Minister Abadi in Munich last week. They underlined the importance of close cooperation between Erbil and Baghdad to address the challenges facing Iraq.

President Barzani also met with French Defense Minister Jean-Yves Le Drian on Monday in Paris to discuss the fight against IS and the military needs of the peshmerga forces.