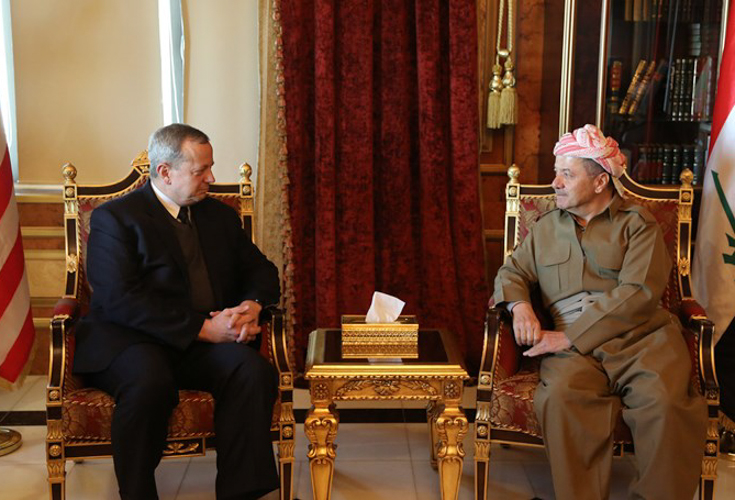 Kurdistan Region President Masoud Barzani on 12 January met with the US Special Presidential Envoy for the Global Coalition to Counter ISIL, General John Allen, in Salahaddin.

General Allen congratulated on the recent military successes by peshmerga forces against the IS terrorists and commended the leadership and personal supervision of President Barzani in these operations, in particular the breaking of the Mount Sinjar siege and the liberation of the towns of Zummar and Rabia. “The Peshmerga have been able to destroy the aura of the IS militants,” the envoy told Barzani during the meeting. He added that other countries in the international coalition are all very impressed by the bravery and the sacrifices of the peshmerga forces in the fight against IS.

General Allen welcomed the recent military cooperation between Erbil and Baghdad, and reiterated that the United States would continue to support the peshmerga forces.

President Barzani thanked the Unites States, and other coalition countries, for their military support for the peshmerga forces, adding that the people of Kurdistan are very encouraged to have a good friend like the United States behind them. He said that the recent terror attacks in Paris prove that terrorism is a global threat for which a global response is necessary.

The President and the US Envoy, who was accompanied by US Deputy Assistant Secretary of State Brett McGurk and US Ambassador to Iraq Stuart Jones, also discussed ways of further cooperation in the fight against terrorism, just as further military requirements of the peshmerga forces.