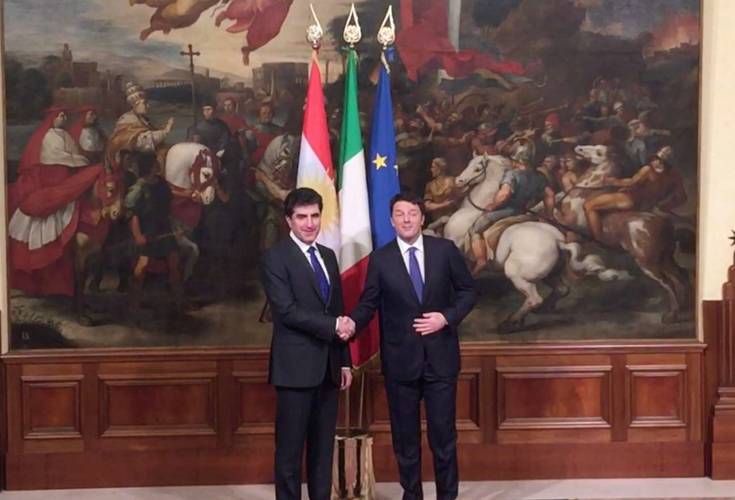 Italian Prime Minister Renzi reiterated that his government “will continue to provide humanitarian and military assistance to the Kurdistan Region, and in order to eradicate terrorism we will stand side by side with the Kurdistan Region in every way possible.” He also expressed his respect to the courage of the Peshmerga Forces in their fight against terrorism.

Moreover, Prime Minister Renzi stated that Italy has decided to upgrade its diplomatic representation in Erbil to a Consulate General, considering that this move will send a message to the world that the situation in the Kurdistan Region is better than before. He stated, “It is important for us that Kurdistan Region’s stability continues.”

In Prime Minister Barzani’s meeting with His Holiness Pope Francis, the current situation in the Kurdistan Region, Iraq and the wider Middle East was discussed, focusing on the latest developments in the war against IS, and the importance of the international coalition against terrorism. The two sides reaffirmed that ISIS is a threat not only to Kurdistan, Iraq and the Middle East but to humanity as a whole.

Prime Minister Barzani briefed His Holiness about the situation of IDP’s and refugees who belong to various ethnic and religious groups from different areas of Kurdistan and Iraq where they used to coexist peacefully, but tragically have been forced to flee their homes leaving behind their belongings.

He pointed out that the presence of this large number of refugees and IDPs in the Kurdistan Region has created a heavy burden for the Kurdistan Regional Government. He called on His Holiness to encourage donor countries and the international community to increase their humanitarian assistance.

His Holiness the Pope expressed his gratitude to the Kurdistan Regional Government for accommodating and providing assistance to the displaced Iraqis and refugees from Syria. Moreover, he commended the coexistence between various ethnic and religious groups who have been living peacefully in Kurdistan for centuries. His Holiness also praised Kurdistan Region’s role in the fight against terrorism for the sake of protecting the people of the region, who deserve respect and appreciation.

The Vatican’s Foreign Minister praised Kurdistan Regional Government for providing shelter and assistance to the displaced people and refugees. He also praised the role played by the Peshmerga Forces in defending all the people of the region, regardless of their ethnicity or religion, against terrorism.