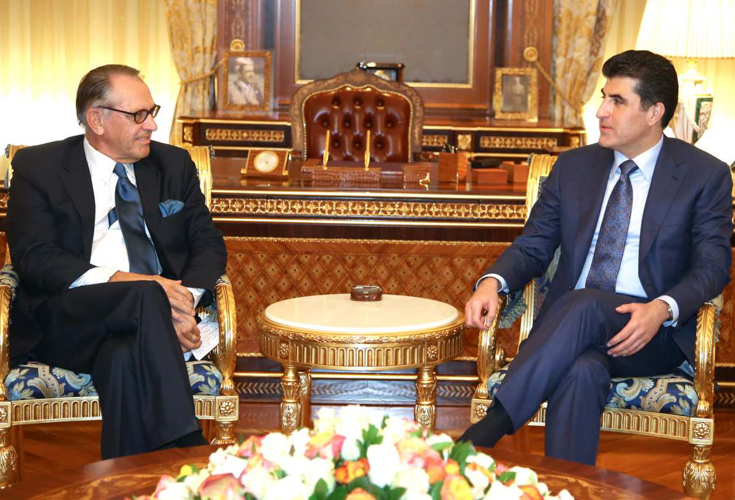 Mr. Eliasson conveyed the gratitude of the United Nations and the international community to the Kurdistan people and their government for welcoming and hosting over 1.5 million internally displaced persons (IDPs) and refugees. He offered his condolences to the families of Kurdistan Region’s security forces, including the peshmerga, who lost their lives in protecting civilians against ISIS’ ruthless aggression.

The situation in Kobane and sending Peshmarga forces to the town and KRG’s support against ISIS aggression were among the topics discussed in the meeting.

KRG’s role in restricting and reducing the threat of ISIS aggression in Iraq was also discussed. Prime Minister Barzani outlined the latest developments of the fight against terrorism. He noted that peshmerga forces along a 1,000-kilometer front are fighting not only for the Kurdistan Region but also on behalf of the world.

It was mutually acknowledged that resolving the ISIS issue requires not only effective military efforts, but also efforts that accept and sincerely invite all Iraqis to participate in a political process that is genuinely inclusive.

The UN Deputy Secretary-General highlighted the importance of Kurdistan Region’s role in the national political process as essential and effective. He noted that a stable Iraq is also essential for Kurdistan.

Prime Minister Barzani reaffirmed KRG support for Iraqi Prime Minister Abadi’s government and that it wishes to resolve all outstanding issues through dialogue. He thanked the UN for supporting formal negotiations between Erbil and Baghdad during the formation of the government.