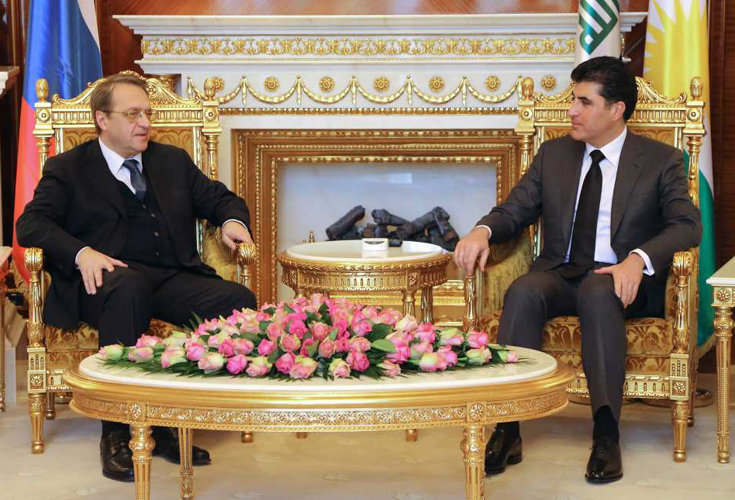 Kurdistan Region Prime Minister, Nechirvan Barzani, received the special envoy to the Middle East of the Russian President, Deputy Foreign Minister Michael Bogdanov, on Tuesday, 20 January. He was accompanied by a number of diplomats, businessmen and representatives from both the private and public sectors in Russia.

President Putin’s special envoy outlined that the reason of his visit to the Kurdistan Region was to learn more about the current situation in Iraq and the Kurdistan Region, with the hope that the visit will pave the way for further cooperation and consolidation of relations between Erbil and Moscow.

Mr. Michael Bogdanov highlighted the historic relations between the people of Kurdistan and Russia which date back to the middle of last century, when the Kurdish historic leader, General Mustafa Barzani and his comrades took refuge in the former Soviet Union.

The two sides discussed the current war against the Islamic State terrorist organisation, known as IS, the recent victories marked by the Peshmerga forces and the impact of the international coalition intervention in countering terrorism.

Given the global security situation, both sides agreed that it is essential for the relevant security agencies in the Kurdistan Region and Russia to cooperate in order to better combat terrorism.

While the delegation reiterated Russia’s support to the Kurdistan Region, Prime Minister Barzani expressed his government’s gratitude for the humanitarian assistance that Russia has provided to the displaced persons and refugees, who fled IS’ violent repression and took refuge in Kurdistan Region.

The situation in the Middle East in general, and in Syria in particular, were also topics discussed in the meeting. Prime Minister Barzani said, “The Syrian problem cannot be resolved militarily. It needs a genuine political solution to attain through dialogue.”

The Russian delegation also expressed their optimism regarding the recent agreement reached between Baghdad and Erbil on oil export and budgetary issues.