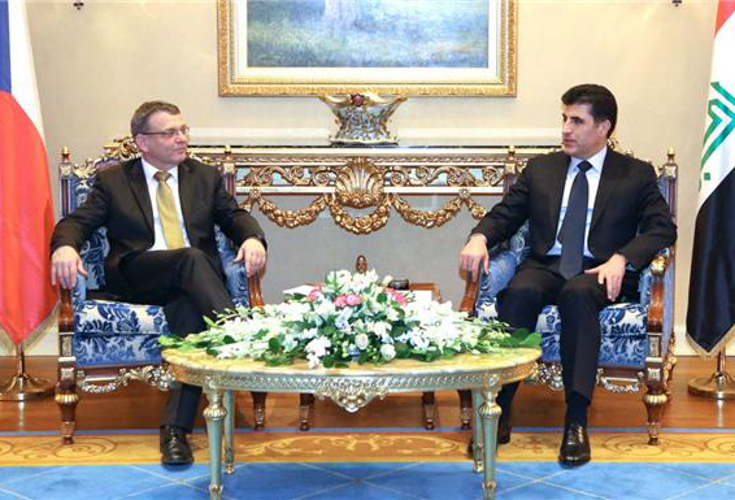 Kurdistan Regional Government Prime Minister Nechirvan Barzani received the Czech Republic Minister of Foreign Affairs Lubomír Zaorálek and his accompanying delegation in Erbil on Thursday. It included the Czech Deputy Minister of Defense and a number of diplomats and officials.

Mr. Zaorálek described the Kurdistan Region as safe, stable and developed in an area that is entrenched with problems and violence. He paid tribute to the people and government of the Kurdistan Region who have been able to achieve such gains both in terms of development and security in such a volatile and dangerous neighborhood.

He also expressed his concern regarding the attacks by the Islamic State terrorist organization, known as IS. The Czech Foreign Minister expressed his country’s willingness to support and assist the Kurdistan Region in confronting terrorist activities and reiterated that the Czech Republic is ready to help militarily, through training and other military assistance, just as by offering humanitarian aid.

On the economic side, Mr. Lubomír Zaorálek stressed his country’s interest in cooperating with the Kurdistan Region in various sectors. For this purpose, a group of representatives from the Czech private sector accompanied Mr. Zaorálek to enhance ties for future investment and trade.

Prime Minister Barzani stated that the Kurdistan Region is looking forward to further developing and strengthening the political and economic ties between the two sides, and that it would particularly provide all kinds of facilities to support Czech companies which are interested in doing business there.

Mr. Zaorálek was also welcomed by the Kurdistan Region President Masoud Barzani with whom he discussed the strengthening of bilateral relations and military support by the Czech Republic to Iraq and Kurdish peshmerga forces. The two spoke about the threat posed by the IS terrorists and the efforts to combat this threat. President Barzani stated that the Kurds are proud to be at the forefront of this fight and standing up to the terrorists along a 1,500-km long front from the city of Kobane in Syria to Diyala province in eastern Iraq.

Foreign Minister Zaorálek praised the role of the peshmerga forces in the fight against IS terrorists and expressed his country’s readiness to support this effort. He noted that his country is also keen to enhance economic ties with Kurdistan and to this end plans to upgrade his country’s diplomatic presence in Erbil to a consulate general. He also lauded the KRG for taking in large numbers of refugees and IDPs from other parts of Iraq.

President Barzani thanked the Czech Republic for its support of Kurdistan and warmly welcomed its decision to upgrade its diplomatic presence in Erbil.