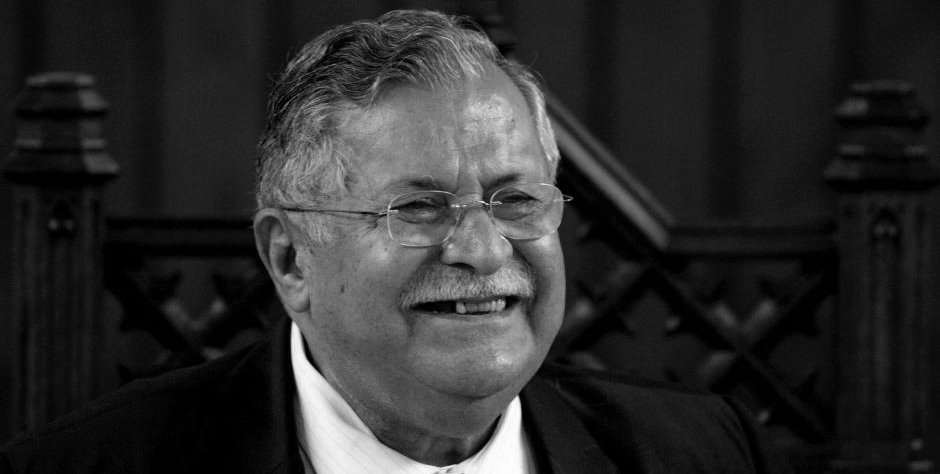 Kurdistan Region of Iraq: grief about the passing of president Jalal Talabani

The Kurdish freedom fighter and former Iraqi president Jalal Talabani passed away on Tuesday, 3rd October 2017, at the age of 83 in Germany.

The Kurdistan Regional Government Representation (KRG) in Austria announces with deep mourning that the respectfully and loving called “Mam” (uncle) Jalal Talabani, former Iraqi president and party leader of the Patriotic Union Kurdistan (PUK) passed away. Together with the KDP he helped drive the Kurdistan revolution forward and formed the coalition of the Iraqi Kurdistan Front against the regime of Saddam Hussein.

Jalal Talabani was a major leader in the Kurdish freedom movement and a tireless fighter for democracy. At the beginning of this political career he played a major role in the Kurdistan Democratic Party (KDP). In 1975 he founded the Patriotic Union of Kurdistan (PUK). His role in combating dictatorship and bringing democracy to Iraq is unforgettable. He, together with Kurdistan Region President Masoud Barzani and other democratic leaders, insisted on rebuilding Iraq on a democratic, pluralistic, and federal foundation after the removal of Saddam Hussein. Equality between Kurds and Arabs and the protection of the rights of Turkmens, Christians, and followers of all other faiths were enshrined in Iraq’s new constitution.

In 2005 Jalal Talabani was the first Kurd elected as Iraqi president, his mandate was prolonged in 2010.

Dr. Mustafa Ramazan, KRG representative in Austria: “ The loss of our dear “Mam” Jalal Talabani is a great loss for the Kurdistan Region, Iraq and the whole Middle East. President Talabani was a great personality, constantly fighting for Kurdish autonomy as well as building bridges with no regards to ethnic or religious borders. Our sincere condolences to his family, his friends, his companions and the Kurdish people.”

The Kurdistan Region has announced seven days of national mourning to acknowledge the life of Jalal Talabani and his important contribution to the Kurdish freedom movement, as well as his tireless fight for democracy and tolerance.

Letters of condolence can be send to the Kurdistan Regional Government Representation in Austria, Canovagasse 7/Top 6, 1010 Wien bzw. an representation@at.gov.krd gerichtet werden.

A public book for condolences will be found in the office of the Kurdistan Regional Government Representation in Austria, Canovagasse 7/Top 6, 1010 Wien, from Tuesday, 10th October 2017, until Friday 13th October 2017 from 10 AM until 2 PM.