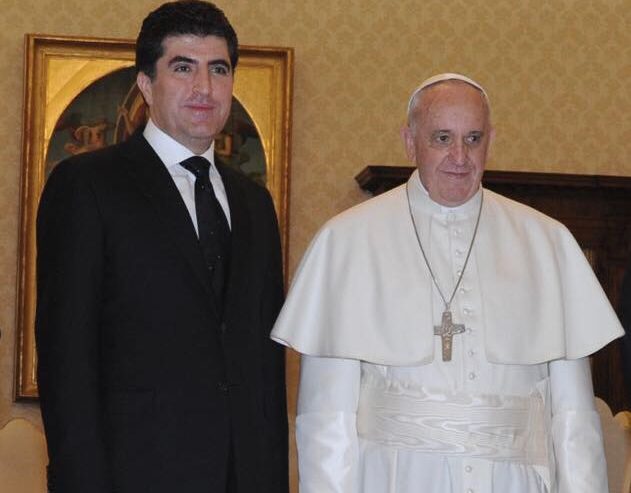 On an official visit to Vatican City, Kurdistan Region Prime Minister, Nechirvan Barzani and his accompanying delegation, were received today by His Holiness Pope Francis.

The Pope thanked the people and government of the Kurdistan Region for accommodating and assisting a large number of displaced people, among them a significant number of Christians, who fled war and persecutions of the Islamic State terrorist group, ISIS.

The Pope expressed his hope that the peaceful coexistence and harmony among the communities that prevail in the Kurdistan Region will be preserved.

Prime Minister Barzani expressed his satisfaction for the visit, and informed His Holiness about the recent political developments in the Kurdistan Region, including the war against ISIS, tensions with Baghdad and the recent incursions by the Iraqi Security forces into the Iraqi Kurdistan disputed territories, which caused the displacement of a significant number of people, including those who had already returned to their place of origin.

Regarding the recent tensions between the Kurdistan Region and the Iraqi federal government, Prime Minister Barzani recalled his government’s stance of favouring dialogue and negotiations to resolve all outstanding issues with Baghdad.

In his meeting later with His Eminence Cardinal Pietro Parolin, Prime Minister of the Holy See, Prime Minister Barzani shed light on the political and economic situation of the Kurdistan Region and the latest developments in the relations with the Iraqi government as well as the efforts so far exerted to initiate dialogue between the two sides.

While he thanked the government and the people of the Kurdistan Region for their assistance to the displaced, particularly to the Christians, His Eminence Pietro Parolin expressed hope that all outstanding disputes between Erbil and Baghdad will be resolved through dialogue and mutual understanding.