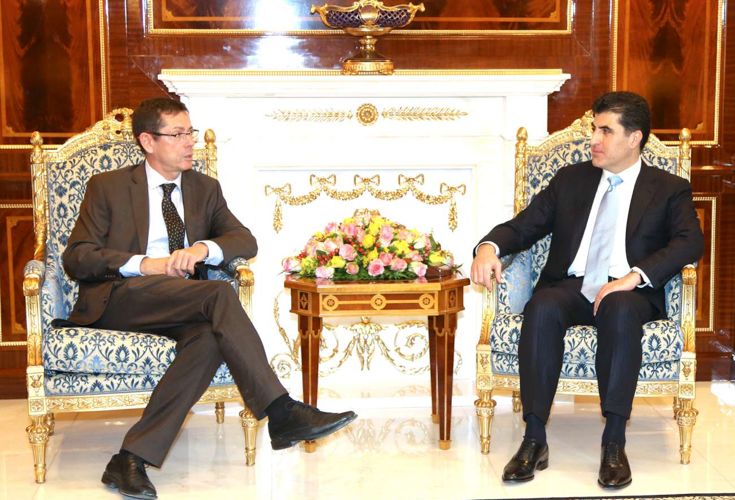 The delegation said that compared to their previous visit back in 2011, they noticed sound improvements made by the Kurdistan Region in the areas of diplomacy, foreign relations, infrastructure, a free press, freedom of speech, human rights, sheltering, women’s rights and combating violence against women. They added that these developments as well as Prime Minister Nechirvan Barzani’s role in bringing them about should be commended. Premier Barzani’s efforts are recognized and supported by the international community, they said.

UN Assistant Secretary-General Šimonović highlighted the Kurdistan Region’s significant progress in terms of legislation, and said that more work could be done with respect to human rights. UN agencies are ready to run special workshops for the related KRG bodies, he said.

He also praised the government and people of Kurdistan for accommodating and aiding the displaced, saying that despite facing difficulties such as Baghdad withholding the KRG’s budget, they have embraced the displaced and refugees regardless of their religion, sect or ethnicity.

Mr Šimonović said that the delegation visited some camps where they spoke with displaced persons, who praised the KRG for providing them with security and stability, at a time when they wish to return to their homes but cannot due to the worsening security situation in their areas. More displaced and refugees are expected to come to the Kurdistan Region due to the dire situation in Syria.

Prime Minister Barzani thanked the delegation for their visit, noting their feedback on the Kurdistan Region’s human rights situation and stressing that the KRG will support their steps. He asked the delegation to send any concerns, reports and violations in human rights to the KRG so that they can take the necessary measures to solve them.

Prime Minister Barzani reiterated that the KRG does not deny problems or failings, especially given the current circumstances. The KRG will spare no effort in solving them, and hopes to work on them with related UN agencies.

Prime Minister Barzani stressed that the KRG expects more support and serious efforts by the Iraqi government and the international community to better help the displaced and refugees, especially as winter approaches. He reiterated that despite the KRG’s limited capacity, it will continue to support the displaced. He added that the KRG will support Mr Abadi’s government and wishes to resolve all its ongoing disputes with Baghdad through dialogue.