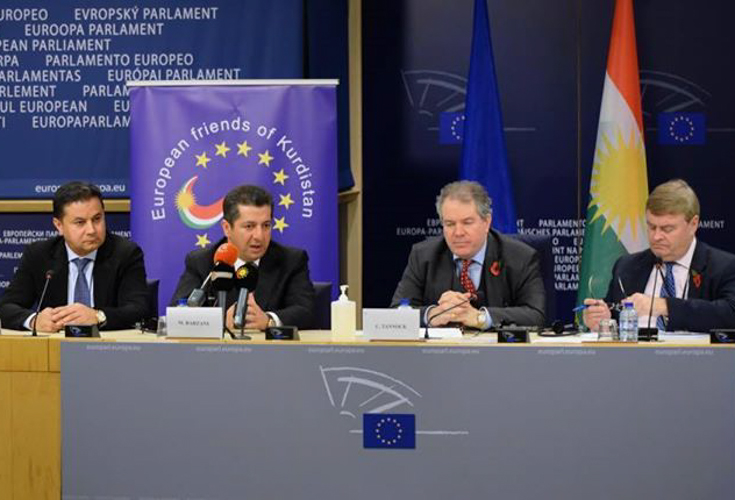 Mr Barzani, who was on his inaugural visit to the European Parliament in Brussels, spoke about the situation in the Kurdistan Region of Iraq, ISIS attacks in northern Iraq and Syrian Kurdistan, and especially the besieged city of Kobane.

He told the European Foreign Affairs Committee that while the European Union had provided light weapons to Kurdish fighters in Kobane, they urgently needed heavy weapons to defeat ISIS.

Countries such as Britain and Germany have begun training Peshmerga fighters, and supplying light weapons, some of which have made their way to Kobane with the contingent of Peshmerga fighters who crossed into Syria through Turkey last week.

“We have to ensure there is no safe haven for ISIS,” Mr Barzani told his audience of MEPs (Members of the European Parliament). He said that the US-led air strikes on ISIS positions had been hugely helpful to Kurdish fighters.

“The air strikes have been a factor in rescuing thousands of civilians and have enabled our Peshmerga forces to liberate many towns and villages,” he added.

He also spoke of the need for reconciliation among Kurdish groups and the importance of enlisting Turkish support against ISIS.

Mr Barzani accused Baghdad of failing to support the Kurdistan Regional Government, saying that far from supporting Kurds in their fight against ISIS, Baghdad had been responsible for budget cuts which left Peshmerga fighters unpaid.

Mr Barzani recently told the New Yorker magazine that the idea of a nation of Iraq exists only in the minds of the White House and has said that the United States has prevented the Kurds from acquiring advanced weapons in the past.