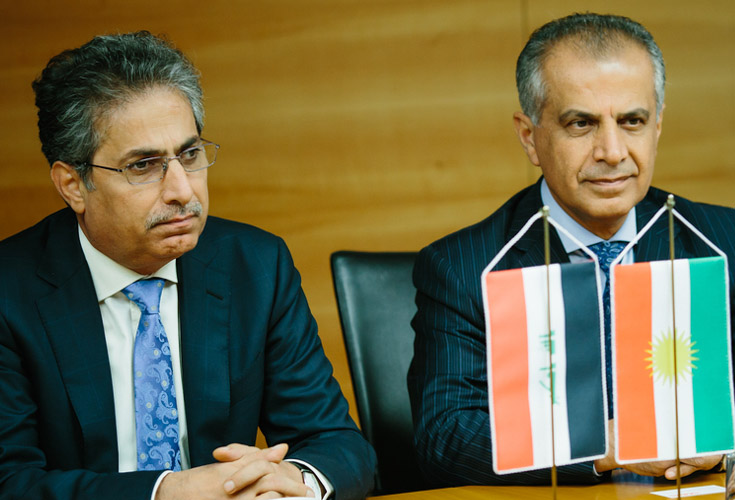 During the first business lunch jointly hosted by the KRG Austrian Representation and the Austrian Federal Chamber of Commerce, Chairman of the Kurdistan Investment Board (BOI), Minister Herish Muharam, gave a presentation on investment and trade opportunities in the Kurdistan Region.

The event brought together Austrian companies, entrepreneurs and institutions who have shown much interest in the Region’s rapidly developing economic sector, particularly in the areas of agriculture, tourism, industry and infrastructure.

In his keynote address, Minister Muharam spoke about specific trade and investment opportunities. “For years international companies have enjoyed success in the Kurdistan Region. Now is the time for Austria to do the same! Austria is known for their excellence in agricultural cultivation and machinery as well as successful tourism promotion. The Kurdistan Region has many projects in these sectors open to you.”

Minister Muharam also stressed need for greater Austrian participation in the infrastructure development of the Region, especially in the construction of schools, hospitals, roads and bridges.

Dr. Richard Schenz, Vice-President of the Austrian Federal Chamber of Commerce, highlighted the positive experience he had during his visit to the Kurdistan Region in 2011 with Austria’s Foreign Minister Dr. Spindelegger, “The business hub Erbil is not only the gateway to the Kurdistan Region, but also to the central and southern provinces of Iraq.

“The necessary conditions for trade and investment have been established by the Kurdistan Regional Government with the introduction of the legal framework for investment, the liberalisation of the economy, the speedy development of the infrastructure, the improvement of the financial and insurance sector, and the numerous trade fairs. The potential offered to Austrian businesses in Iraq is large and we have the greatest interest in deepening our trade relations”. Dr. Schenz added that the Chamber hopes to hold its first Kurdistan Region forum in Austria next year.

Dr. Surood Najib, Iraq’s Ambassador to Austria and Dr. Mustafa Ramazan, the KRG Representative to Austria, welcomed the audience. Dr. Ramazan remarked that “Renowned Austrian companies, such as Austrian Airlines, OMV and Doppelmayr, are already contributing to the positive economic development of the Region. The Kurdistan Region has proven to international companies to have a lot of potential for success and rich experiences.”

Other participants in the discussion included Mr. Stephan Brändle, whose company Doppelmayr has already completed two tourist cable car projects and is constructing a third, as well as Mr. Stefan Haid of Roland Berger, a strategy consultancy group working with the Kurdistan BOI, particularly on institutional development.

Minister Muharam thanked the Slovakian Government for receiving the delegation, “The Kurdistan Regional Government very much welcomes the opportunity to have Slovakian companies do business in the Region. We want learn from your experience and look forward to your new office in Erbil.”