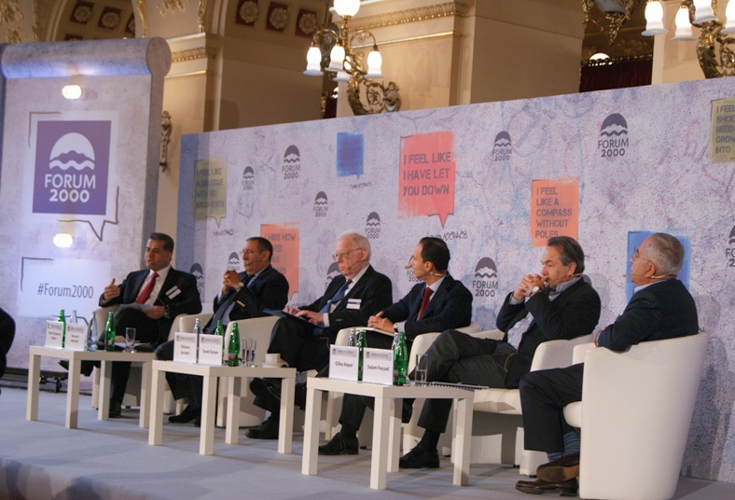 The KRG’s Head of Foreign Relations, Minister Falah Mustafa, concluded his first visit to the Czech Republic yesterday, where he spoke at the Forum 2000 Conference in Prague.

The Forum brought together several leading politicians, former diplomats and government officials, a large number of international think tanks, as well as representatives of academia and civil society. This year’s aim of the Forum was to analyze and compare the political process and route to democracy of different countries, and the different challenges that many countries face, namely ISIS and radicalism.

Minister Mustafa participated in two panels focusing on the new Middle East, the Arab Spring, and the recent threat of the terrorist organization the Islamic State (IS). During the interactive panels, Mustafa presented a viewpoint from Kurdistan, stressing the importance of democratic values, equality and justice. He said that the KRG and the Peshmerga forces are reliable partners of the international coalition in fighting the common enemy IS and are the boots on the ground in this war.

Commenting on his three-day visit, Minister Mustafa said “This is a good opportunity to present the KRG’s views to members of the international community and also to get the views of the wide range of participants at the Forum on issues relating to Kurdistan, Iraq, and the wider Middle East.”

The theme of this year’s Forum, which is in its 18th year, was “Democracy and Its Discontents, A Quarter-Century After the Iron Curtain and Tiananmen.”

At a special panel on the future of Kurdistan, Minister Mustafa spoke about the nation’s history and the events leading up to the current political and security situation. He explained the KRG’s relations with Baghdad and neighbouring countries, as well as the war on ISIS which he said is a global threat that must be fought with greater efforts by all. He also gave a clear picture of the KRG’s policies and the way forward. The Future of Kurdistan panel was organized by the CEVRO Institute, a school of political studies based in Prague, in cooperation with the Prague Centre for Transatlantic Relations (PCTR) and Forum 2000.

The Minister also visited Radio Free Europe/Radio Liberty (RFE/RL) news agency, where he met with the staff of Radio Free Iraq and was interviewed in Kurdish, English and Arabic.

As well as participating in the Forum, Minister Mustafa held bilateral meetings with the Czech Deputy Minister of Foreign Affairs, Martin Tlapa, Minister of Trade and Industry, Jan Mladek, and the Head of the Foreign Affairs Department of the President’s Office, Hynek Kmonicek on the margins of the conference.

Minister Mustafa briefed the officials on the current situation in Kurdistan and its surroundings, particularly the developments on the KRG front with the ISIS terrorists. He thanked the Czech government as part of the international coalition for their rapid response and assistance to the KRG during the security emergency situation since August 2014. Minister Mustafa was pleased to see the long-term commitment of the Czech Republic on a number of areas.

Recalling the long-standing historic ties between the governments of Kurdistan and Czech Republic, both sides agreed to consolidate relations through high-level visits, upgrading the diplomatic representation of the Czech Republic in Erbil to a consulate, the continuation of trade and business, as well as various other exchange programmes on the educational and cultural level.