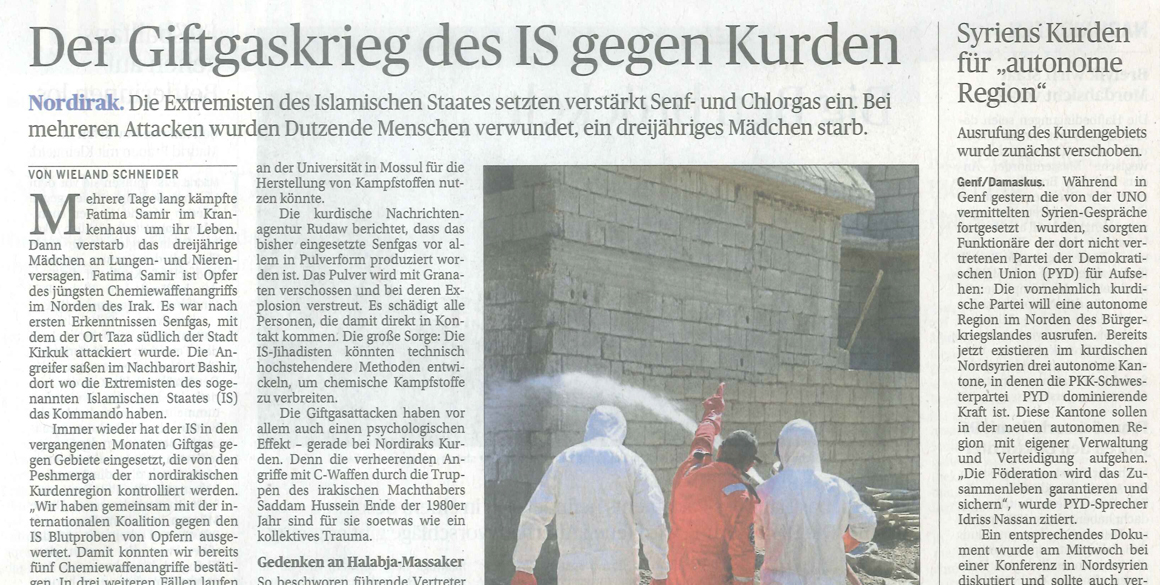 Austrian newspaper die Presse reports: „The poisonous gas war of IS against Kurds“

The daily Austrian newspaper die Presse from 17 March 2016 portrays how the terror organization IS has recently and repeatedly attacked peshmerga forces and civilians in the Kurdistan Region with poisonous gas.

As a result of mustard gas and chlorine gas attack in Sinjar, Makhmur, and Taza, several hundred peshmerga were wounded. Particularly shocking is the case of Taza, where a three year old girl died following the attacks. Particularly disturbing is the stated presumption, based on statements made by the peshmerga ministry of the Kurdistan Regional Government (KRG), that the terror militia IS is currently enhancing its capabilities in respect to chemical weapons. It is believed that poisonous gas is produced by IS in laboratories in Mosul.

The article furthermore refers to the memorial day of the poisonous gas attacks 28 years ago on the Kurdish-Iraqi town of Halabja. On 16 March 1988 the regime of Saddam Hussein bombed the town in the south-eastern part of the Kurdistan Region with mustard gas, whereby more than 5000 persons died. The attacks on Halabja, as well as the Anfal campaign which led to the death of hundreds of thousands of Kurds, is, as President Masoud Barzani is quoted, “a symbol of oppression of the people of Kurdistan”.

Here you can find the original article (German).