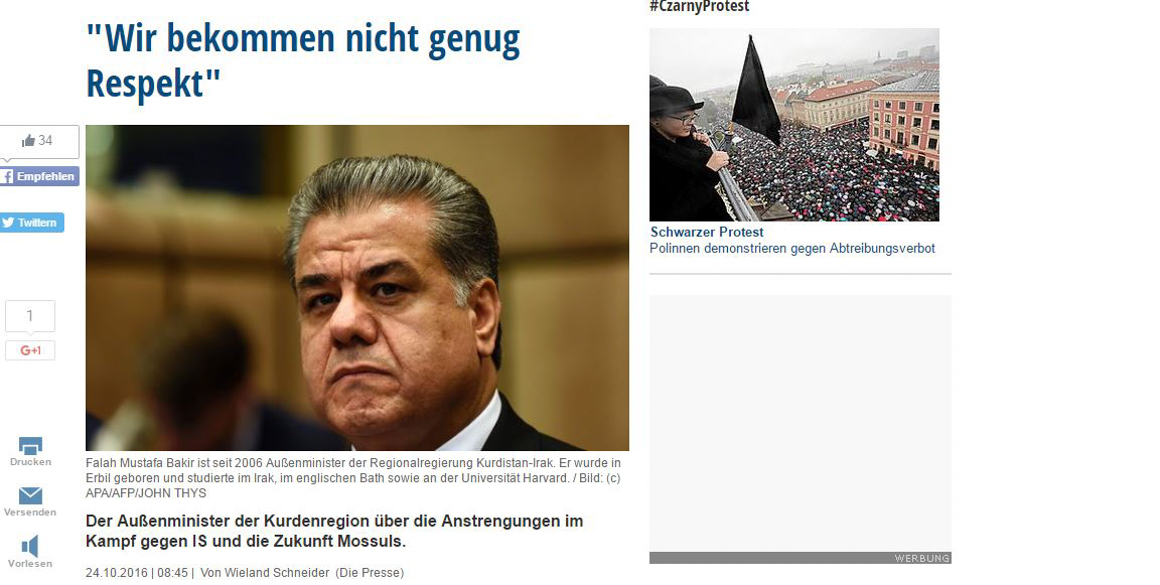 In an exclusive interview with the Austrian newspaper DiePresse, Foreign Minister of the KRG Falah Mustafa Bakir talks about the current efforts of the Peshmerga in their fight against the IS, the responsibility of the International Community regarding the respective humanitarian consequences and the political future of Mosul.

The Minister points out that the Peshmerga, together with the Iraqi army, have started the last chapter of the fight against the Islamic State in Iraq with the liberation of Mosul.
The Kurdistan Region shares a frontline of over 1000 kilometres with the Islamic State and special caution is crucial due to its use of chemical weapons, suicide bombers and booby traps. The Peshmerga forces don’t have the necessary equipment and therefor the air support executed by the International Coalition is highly important.

In addition, the Foreign Minister of the KRG calls upon the International Community to support the Kurdistan Region with the challenging humanitarian situation. All the people who seek shelter are assured that they will be provided with a safe refuge, just like in the last years, but with regard to the humanitarian care, the Kurdistan Region has already reached its capacity limit long ago. With the liberation of Mosul, up to another three-quarter million people might flee to the Kurdistan Region.

There is disappointment about the continuing lack of respect towards the significant role of the Kurdistan Region. At an international conference in Paris about the liberation and future of Mosul, for instance, no representatives from the Kurdistan Region were invited, even though the Region plays a crucial role in the fight against the Islamic State as well as dealing with its humanitarian consequences.

Nonetheless, the Minister emphasizes that the Peshmerga forces will strictly adhere to the agreement negotiated between Baghdad, Erbil and the International Coalition, and they will not enter the city of Mosul.

Furthermore, the Minister thanked Austria for the humanitarian aid provided so far. Austria could play a major humanitarian role in this difficult situation. There is need for everything, from the provision of medical treatment as well as protective gear for the Peshmerga forces to psycholigcal assistance for the victims of IS.