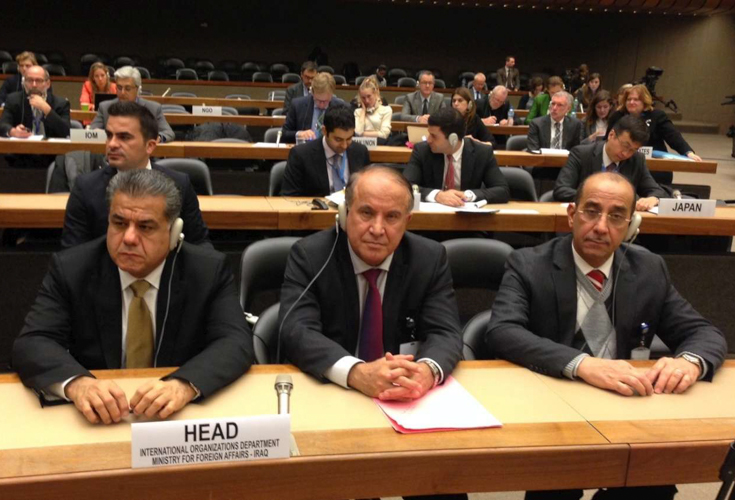 In the past week, two major meetings took place which aimed at tackling the ongoing humanitarian and refugee crisis in Iraq, which was caused by the displacement of over two million people in Iraq alone, who had to flee the IS terror. The first meeting was held in Geneva, organized by the United Nations High Commissioner for Refugees (UNHCR), where the Kurdistan Regional Government (KRG) participated as part of the Iraqi delegation along with ministers from member states, such as Sweden, Germany, or the United States of America. The second took place in Baghdad, where the Government of Iraq, the KRG, and United Nations agencies held a roundtable meeting with donor countries and diplomats based in the capital.

In Geneva, the United Nations High Commissioner for Refugees, António Guterres, made clear that “providing refuge for vulnerable people fleeing war is of life-saving importance for the individuals affected, but it’s also an important show of solidarity with countries of the region that are hosting millions of Syrians.” Ambassador Ahmed Bamarni, Head of the department of international organization at the Iraq’s ministry of foreign affairs, delivered Iraq’s speech at the conference. He said, “The total number of Syrian refugees in Iraq has reached 280,000, of whom 97% have taken shelter in the provinces of the Kurdistan Region.”

Responding to the pleas, the member states of UNHCR agreed on accepting more refugees in their countries, in order to aid the Kurdistan Region and other affected regions and countries who are neighbours to the conflict. After pledges and indications of future commitments by the member states, UNHCR expects the total number of places for Syrian refugees available in the coming months to reach 100,000. This includes 62,000 facilities already made available by the respective governments.

The member states further applauded and praised the generosity that the neighbouring countries and regions of the crisis have given to all refugees. The Foreign Minister of the KRG, Falah Mustafa Bakir, thanked the UNHCR for its efforts in helping aid the refugees and explained the commitment of the KRG: “The Kurdistan Region has pursued an open door policy and has taken all Syrian refugees who have fled for the safety of our region.”

The following meeting in Baghdad further discussed the topic of refugees in Iraq and the financial burden the humanitarian crisis places on Iraq’s budget. It was chaired by Saleh al-Mutlaq, Iraq’s Deputy Prime Minister, and attended by the KRG representatives Karim Sinjari, Minister of Interior, Ali Sindi, Minister of Planning, and Falah Mustafa, Head of Department for Foreign Relations, as well as the Iraqi ministers of Foreign Affairs, Finance, Migration and Displacement, and representatives of UN agencies as well as 40 ambassadors to Iraq.

Deputy Prime Minister Mutlaq explained the crisis, “Addressing the needs of the IDPs is out of the capacity of Iraq. We are facing harsh financial challenges and sharp decline of oil price has exacerbated the situation. Iraq is in need of $5 billion [approx. €4 billion] to address the needs of IDPs and their return to their areas.” The KRG Minister of Planning, Ali Sindi, added that “hosting of IDPs in the Kurdistan Region of Iraq is placing a huge burden on the region’s social services, as well as its financial resources, which is becoming unsustainable.” As the crisis is far from over and winter is beginning to affect the refugees, the challenges are constantly increasing, agreed Jacqueline Badcock, Deputy Special Representative of the UN Secretary-General and Resident and Humanitarian Coordinator for Iraq. “Fresh funds are now needed to avert this crisis from becoming a humanitarian catastrophe,” she explained.

Commenting on the meeting, KRG Foreign Minister Mustafa said, “The large number of IDPs in the Region has stretched our infrastructure and social services to the limit. This meeting was a good opportunity for the KRG to be present in Baghdad and to address members of the international community in highlighting the plight of IDPs.”