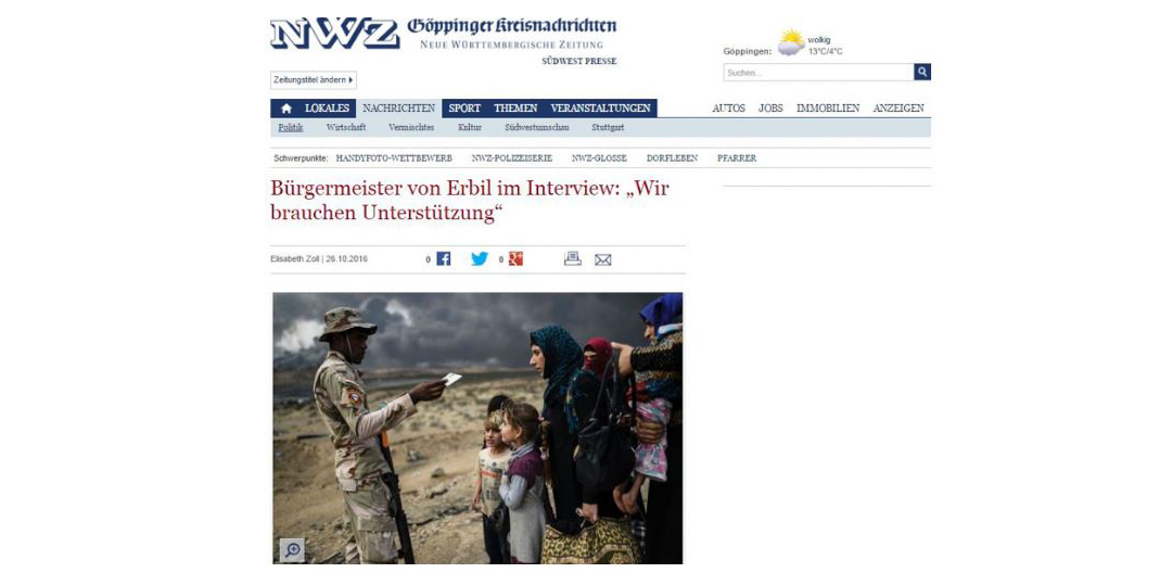 In an interview with the German newspaper Neue Württembergische Zeitung, the mayor of Erbil, Mr. Nihad Qoja, talks about the humanitarian consequences of the ongoing Mosul offensive and the expected large-scale flows of refugees into the Kurdistan Region.

The mayor of the capital of the Region elaborates on an aid-package that had recently been signed between the Kurdistan Regional Government and the United Nations as well as on the assistance of the Iraqi Federal Government. However, without the support of European countries, the Kurdistan Region will not be able to cope with the dimension of this humanitarian crisis, according to Mr. Qoja. The Region is currently home to over one million refugees and IDPs, while Erbil hosts around 200.000 thereof.

In order to prevent extremists from entering the Region together with refugees from Mosul, the Kurdish security forces are working non-stop – not without success, the mayor argues: the Kurdistan Region has been relatively stable and safe, even with the imminent threat of ISIS in front of its doors during the past two years. Moreover, the newly arriving refugees from Mosul will not be sheltered in the city of Erbil directly, but rather in buffer zones around 40km from Erbil and 35km from Mosul. This measure is expected to prevent terrorists from entering the cities of the Region.

In terms of a post-liberation plan for Mosul, Erbil’s mayor emphasizes the importance of the swift reconstruction of devastated areas, in order to allow the people to return back to their homes one day as well as to allow the Kurdistan Region to recover from this humanitarian crisis. Moreover, a functioning political administration of Mosul must be key to the post-liberation process, in which factions should be involved in order to avoid the mistakes of the past, Mr. Qoja argues.