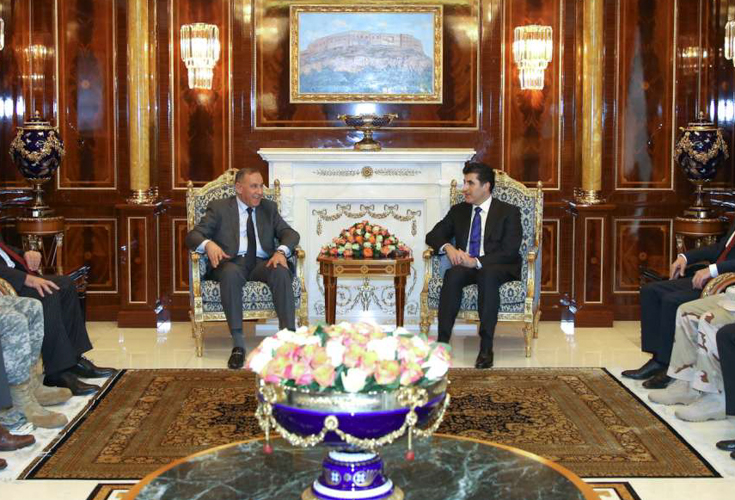 On Monday, 3 November 2014, Kurdistan Region Prime Minister Nechirvan Barzani received the Defense Minister of the Government of Iraq, Dr Khaled al-Obeidi, to discuss the current security situation in Iraq as well as the cooperation of Peshmerga forces and the Iraqi Army.

Minister Khaled al-Obeidi was accompanied by a delegation including the Chief of Staff of the Iraqi Army, the US Chief Security Coordinator in Iraq, the Governor of Mosul, Iraqi and US military officials, and advisors. The Kurdistan Regional Government Minister of Peshmerga Affairs also attended the meeting.

All representatives reaffirmed the importance of continuous and consistent cooperation between Peshmerga and the Iraqi armed forces. Iraq’s Defense Minister commended the effectiveness of Peshmerga forces in confronting threats to the country’s security, highlighting their achievement in recovering Zumar and Rabia towns from ISIS terrorists. Additionally, he declared that the Peshmerga forces are an important and integral part of Iraq’s defense system.

He indicated that he would spare no efforts to resolve the Peshmarga related outstanding issues with Baghdad and he expressed his wishes that the much expected visit of Kurdistan Region’s delegation to Baghdad could pave the way in solving all the outstanding issues between the KRG and the central government.

Furthermore, the international community’s response in supporting national and regional efforts to confront, stop, and roll back ISIS terrorists was acknowledged, lauded, and discussed by all representatives. The effectiveness of airstrikes by the US and other coalition partners was highlighted as vitally important to helping halt terrorist advances in many areas.

Finally, regarding relations between the Kurdistan Regional Government and the Government of Iraq, Prime Minister Barzani expressed optimism about the future. He emphasized the KRG’s positive interest and disposition in settling all outstanding issues between Erbil and Baghdad through respectful dialog and negotiation.