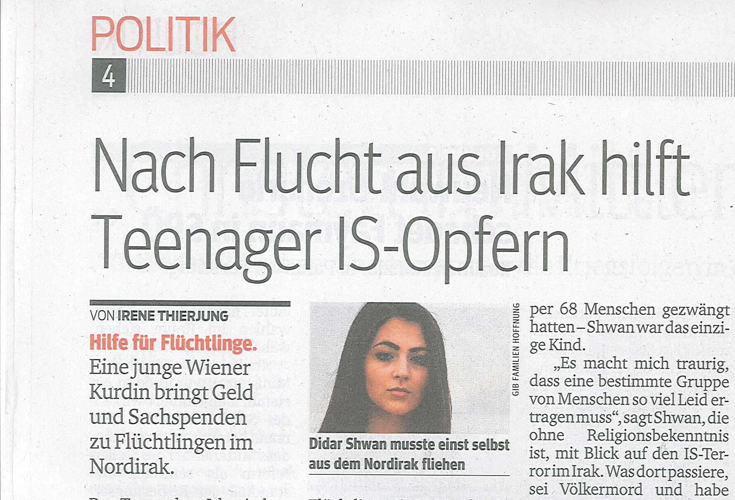 A young Viennese Kurd brings donations of money and goods to refugees in Northern Iraq.

The terror of the “Islamic State” (IS) has forced hundreds of thousands of people in the Kurdish Northern Iraq to flee. Most of them have found shelter in one of the camps, many others however have to struggle along. Whole families live on construction sites, in schools or tents. To help these people is the aim of 17-year old Didar Shwan. The Kurdish girl, who has been living in Vienna for five years now and who also visits the school here, has initiated a donation campaign, which is supported financially and logistically by the Kurdish Regional Government in Northern Iraq.

Shwan explains her remarkable engagement to the KURIER with the words “it hurts me, what is happening in Iraq”. She feels a connection to the Kurds in her “other home”, as she calls Iraq, not only because of her ethnic background. Shwan was a refugee once as well. Until 1998 a civil war raged in Kurdistan. Her parents had lost many relatives and friends because of the ex-dictator Saddam Hussein, who was overthrown in 2003, and were displaced again and again. “They were there, when hundreds of thousands of people had to flee to save their lives – without water, without food. A piece of bread per day was considered a lot,” says Shwan.

Across Europe
The 22-year old father and the 19-year old mother, who was expecting Didar already, decided to finally leave Iraq in the mid-90s. The father left to Germany by himself, in 1997 the mother and the one-year old Didar followed. Their flight led them across Europe, amongst others on board of a crammed motorboat and in a truck, in which people-smugglers had squeezed 68 people – Shwan was the only child.

“It saddens me that a certain group of people has to suffer so much,” says Shwan, who is without a religious denomination, in view of the IS-terror in Iraq. What happens there is genocide and has nothing to do with Islam, which she knows about.

Together with five other teenagers, Shwan wants to collect donations of money and goods. She distributed leaflets to doctors and restaurants. Supported by school representatives, they intend to collect money in schools. As soon as enough money has been accumulated, Shwan and her fellow campaigners want to travel to Iraq – flight and accommodation are being paid by the regional government, so that “every collected cent” reaches those in need: in the form of clean water, blankets, baby food, gas cookers, or concrete in order to place the tents of the refugees on a firm foundation during the approaching harsh winter.