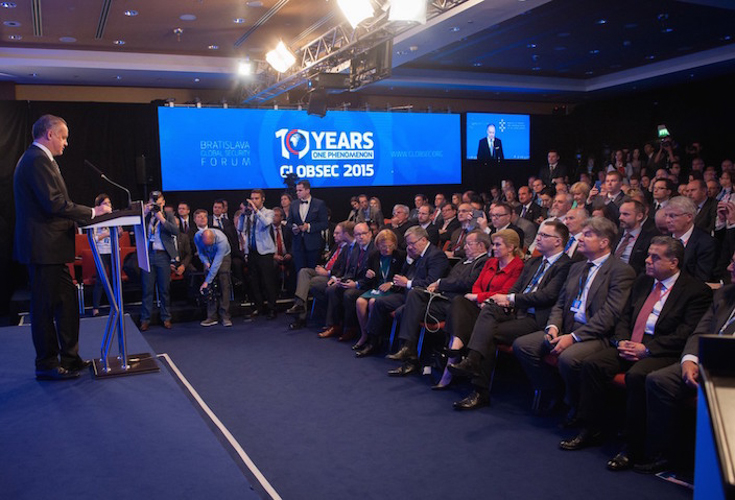 Minister Falah Mustafa represented the Kurdistan Regional Government (KRG) at the Global Security Forum (GLOBSEC), which was held from 19-21 June 2015 in Slovakia’s capital city, Bratislava. The leading foreign policy and security forum in Central Europe celebrated 10 years since its establishment in 2005. World leaders, heads of state, influential experts from think tanks and business leaders gathered to discuss current issues that pose a threat to global peace and security.

With the security and political instability in the Middle East and North Africa, and the KRG as an emerging power on the ground, Minister Mustafa attended public panels on issues regarding the political, security, and economic challenges that the world is facing. The KRG Minister also spoke at a panel on “The Age of Propaganda” and the importance of media in combatting terrorism, as well as the Young Leaders Forum on the “Changing dynamics of the Middle East.” On the last day of the Global Security Forum 2015, Minister Mustafa held a press conference and briefed the media agencies on the developments and challenges in the Kurdistan Region.

On the occasion of his participation, Minister Mustafa said: “I am pleased to be back at GLOBSEC Bratislava 2015 and to be given the opportunity to share our experience and inform decision makers and world leaders on the challenges facing Kurdistan, while also obtaining further support for our Peshmerga forces and humanitarian assistance to the IDPs and refugees.”

Minister Mustafa also held a meeting with Miroslav Dusek, Senior Director and Head of the Middle East and North Africa at the World Economic Forum (WEF). Both sides discussed ways and means to foster relations between the KRG and the WEF and agreed that further engagement of the private sector would help to ameliorate the economic challenges resulting from the region’s adverse security and humanitarian situation

Furthermore, Minister Mustafa met with General John Allen, the Special Presidential Envoy for the Global Coalition to Counter ISIS. He highlighted the political and security situation in Kurdistan and the wider region and called upon KRG’s international partners for their continued support to the Peshmerga forces in their fight against ISIS.

During his GLOBSEC sideline meeting with Ambassador Jan Kubis, the United Nations Special Representative to Iraq, Minister Mustafa emphasized the Humanitarian challenges in Kurdistan. Minister Mustafa reiterated KRG’s commitment to its open door policy and the maintenance of Kurdistan as a safe haven in light of the deteriorating security situation in the rest of Iraq.

Minister Mustafa concluded his visit to Bratislava with a sideline meeting with U.S. Senators John McCain, John Barrasso, and Tom Cotton where he updated them on the recent developments on the political and security front in the Kurdistan Region and wider Iraq. Minister Mustafa thanked the Senators for their continuous support to the Peshmerga forces in their fight against IS.