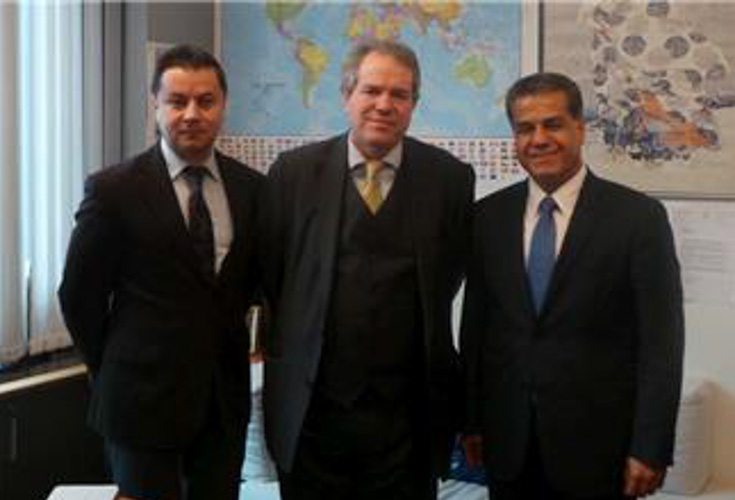 Brussels, Belgium (krg.org) – Minister Falah Mustafa, the Head of the Department of Foreign Relations, addressed a conference in the European Parliament on human rights in Kurdistan and Iraq during a two-day official visit to Brussels this week.
During his visit, Minister Mustafa met with members of the European Parliament, government officials from the European Union as well as Belgium and visited both the Iraqi Embassy and Kurdistan Regional Government Representation to the EU, where he was accompanied by the KRG Representative to the EU, Delavar Ajgeiy.

In his visit to the European Union offices, Minister Mustafa met with a group of officials from the European External Action Service headed by the Director for North Africa, Middle East, Arabian Peninsula, Iran and Iraq, Cristian Berger. During the meeting Minister Mustafa briefed the delegation on the significance of Iraq´s parliamentary elections, the current issues between Erbil and Baghdad, the Kurdistan Region´s relationship with Turkey and the need for the European Union to be engaged with Iraq.
Minister Mustafa also highlighted the importance of the EU having a representative office in Kurdistan, as well assistance from the EU to ensure that the Kurdistan Region is included and benefits from the cooperation agreements signed between Iraq and the EU. Mr Berger asked about the latest developments regarding Syria stressing that on a humanitarian level, this is the largest assistance operation the EU has ever been involved in. Minister Mustafa highlighted the plight of the Syrian refugees in Kurdistan and asked for more humanitarian support for those refugees.

During the second day of the visit, Minister Mustafa attended a conference organised by the Chairman of the European Parliament’s Delegation for Relations with Iraq, Struan Stevenson MEP, and participated in two separate panel discussions on human rights in Iraq as well as in Kurdistan.

During the conference, which was attended by various representatives from Iraq, the Head of the DFR presented a speech on the latest developments in Kurdistan as well as the KRG’s vision for the future. In his speech, the Minister said, ‘We in Kurdistan are proud of our culture of tolerance and peaceful coexistence. Respect for human rights is the guarantee for peaceful coexistence, progress and prosperity for people living together. This is what we have done in the Kurdistan Region.’

The KRG delegation also visited the Belgian Foreign Ministry where they met with the Head of the Iraq desk, Luc Truyens, and other officials, where they discussed a number of issues including the similar models of governance that exist in both Iraq and Belgium in terms of federalism and the devolution of powers from the centre to the provinces and regions. Minister Mustafa said, ‘We want to learn from other countries’ experiences of federalism and especially Belgium, a country which like Iraq, is comprised of different ethnicities.’

Minister Mustafa also made a courtesy call on the Iraqi Embassy where he was received by Ambassador Mohammed Humaimidi. They discussed the latest political and security developments in Iraq, the talks between Baghdad and Erbil, and the upcoming Iraqi elections.