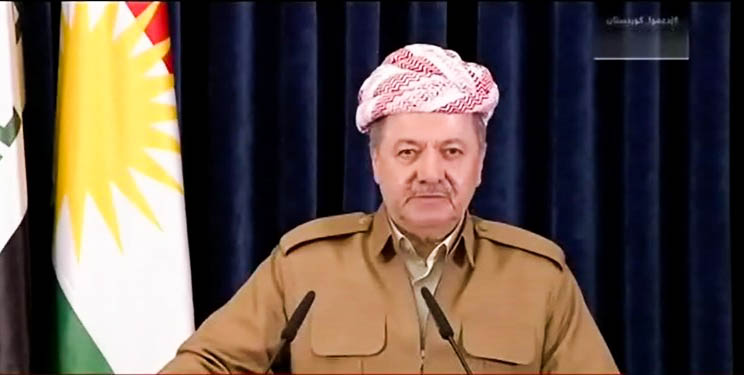 President Barzani made reference to the role of the Peshmerga forces in the operations against the terrorists of the Islamic State and added that if it were not for the Peshmerga forces, the liberation of Mosul and other places would not have been possible. The President stated that he thought that that brave struggle would have been appreciated by the international community, however, they once again showed the world that the people of Kurdistan “have no friends but themselves and the mountains.”

President Barzani expressed his concern over the international community’s silence regarding the use of American weapons to kill the Peshmerga forces. He added that the people of Kurdistan are befuddled that they are being attacked by certain people who are on America’s list of terrorists and are using American weapons.

President Barzani stated that after the liberation of Iraq in 2003 we did everything possible in pursuit of creating a federal, democratic and pluralistic Iraq only to realize that the same thinking, same culture of chauvinism certainly outlived the Saddam era. The President also stated that the Kurdistan Region repeatedly made efforts to convince the government to collectively work in accordance with the Constitution. However, it became clear that the concept of true partnership with Iraq was simply not possible. “We decided,” the President said, “to become good neighbors since we failed to become true partners.” Initially, the reactions to our request for separation were well, the President said, however, those same people were recently on top of Abrams tanks and attacked the Kurdistan Region.

On the October 16 attack on the city of Kirkuk by the Iraqi Popular Mobilization Forces, the President described it as an act of betrayal by some Kurdish individuals who cooperated with the PMF against the people of Kurdistan. He stated that that national betrayal temporarily crushed the dreams of three million Kurds who had cast their votes on September 25 for an independent Kurdistan. He described the betrayal as stabbing those voters in the back with a “poisoned knife.”

President Barzani reassured the people of Kurdistan that their votes on September 25 were part of a historic event which cannot be altered by any force.

President Barzani said that, “I, as Masoud Barzani will continue to serve the people of Kurdistan and that I have been, before, during and after the Presidency, the same Masoud Barzani, the same Peshmerga.” He added that the most sacred and highest title to him is being a Peshmerga.

The President stated that it is of enormous pride that the people of Kurdistan are now at a stage where they confidently demand their rights. He concluded his remarks by saying that he will remain with the people of the Kurdistan Region as their Peshmerga and that the end result will certainly be a victory for our righteous cause.