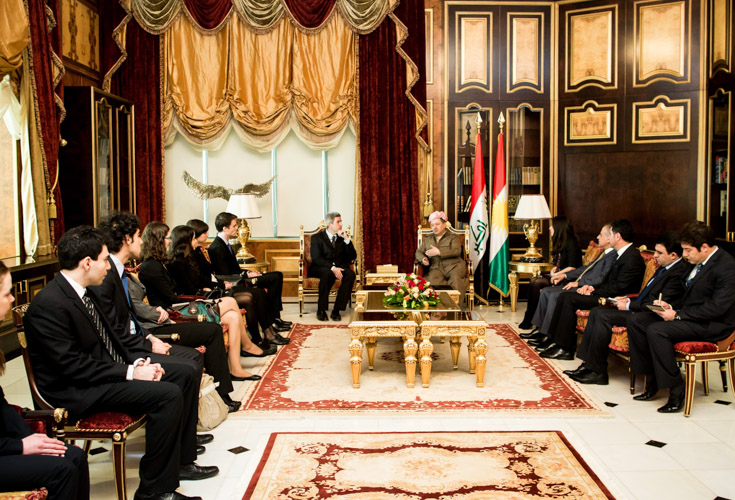 From 2 to 7 April 2013, a delegation of students from the Diplomatic Academy of Vienna had the opportunity to participate in a study trip to the Kurdistan Region of Iraq. In addition to meeting with political leaders, the delegation also had the chance to visit historical landmarks and to experience Kurdish culture and tradition first hand.

The first days of the week-long visit were focused on the political and economic development of the Region. Meetings with high-ranking officials, such as Minister Falah Mustafa, Head of the Department of Foreign Relations, and Mr. Masrour Barzani, Head of the Security Agency, gave the students insights on Kurdistan’s relations with the international community. Minister Herish Muharam, Chairman of the Board of Investments, discussed Kurdistan’s success in economic development and the importance of foreign investments with the students, while Dr. Hassan Sura, Vice Speaker of the Parliament, provided them with information on the parliamentary system and the upcoming elections in 2013.

A highlight of the trip was the meeting with the President of the Kurdistan Region, Masoud Barzani, who received the delegation in his presidential palace. After addressing the students, the President answered their questions on Kurdistan’s past and the way forward. When asked about the importance of Kurdistan’s youth in securing a bright future of the Region, the President emphasised, “Our youth will never let history repeat itself. They are highly educated and informed young individuals, who use social media channels to exchange information. They will never again accept oppression, war and destruction in their lives.”

During the second half of trip, the student delegation had the chance to delve into Kurdish traditions and discover the culture of the Region. The students visited bustling Lalish, the holiest shrine of the Yezidi community, and were greeted by Babe Sheikh. As guests of the governor of Duhok, the delegation enjoyed the view from the local dam. After a drive up the winding roads to the hills of Alqosh the students met with representatives of the Chaldean Church and discovered the Rabban Hormizd Monestary, carved into the mountain in the 6th century BC. A ride with cable cars up the 2,127m high Korek mountain opened up a spectacular view on the surrounding landscape. During a visit of the Bekhal Waterfalls the students enjoyed refreshment in the area’s rich water resources.

Apart from Kurdistan’s natural beauty, the delegation also enjoyed Erbil, the lively capital city of the Kurdistan Region, and its surroundings. A visit to the Erbil Citadel, the oldest continuously inhabited town in the world, concluded the study trip.