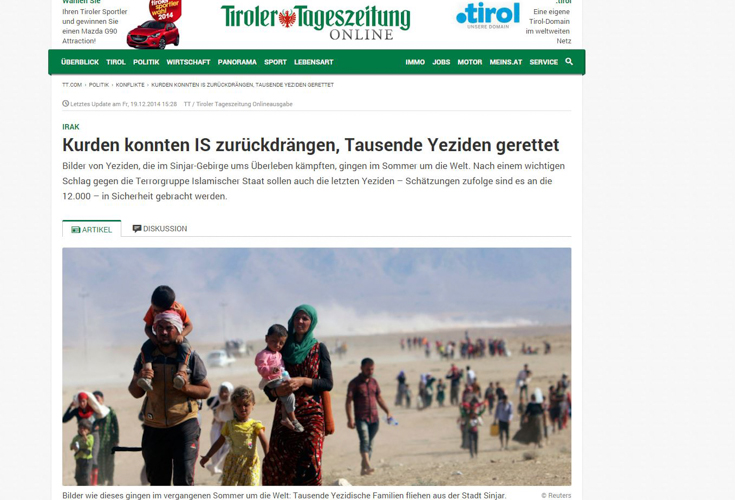 Tiroler Tageszeitung: Kurds push back IS, thousands of Yezidis saved

Pictures of Yezidis struggling for their survival in the Sinjar mountains went around the world this summer. Following a major blow against the terror group Islamic State, the last Yezidis – according to estimations around 12,000 – have been brought to safety.

After the break through of the siege around the Sinjar Mountains in Northern Iraq, the Kurdish peshmerga forces managed to further push back the jihadist militia Islamic State (IS). On Friday, the peshmerga started bringing Yezidis to safety, which had been captured in the mountains.

Jihadists flee
The Kurds further advanced into the barren mountain area, while Kurdish and Iraqi troops made progress towards the city of Tall Afar, according to eyewitnesses. As the President of the autonomous Kurdistan Region’s Security Council Masrour Barzani stated, the jihadists were forced to flee to Mosul and Tall Afar. His fighters have occupied 700 square kilometer which had been under the control of IS. According to the US Ministry of Defense, the US led military alliance has been flying more than 50 airstrikes against IS in the Sinjar Mountains since Monday.

The Yezidi leader Said Hassan Said stated that 1,200 families still remained in the barren mountain range. Faisal Saleh, who is stranded with his family in the mountains, said that around 70 percent were in control of the peshmerga, nevertheless, the southern part is still in the hands of the jihadists. The Kurds first provided those with help, which were in need the most. The General Secretary of the Kurdish Peshmerga Ministry Jabar Yawar estimates that about 12,000 people have been trapped until recently.

Several high ranking IS commanders assassinated
In the meanwhile, the US Pentagon announced that since the middle of November, several high ranking IS commanders have been assassinated during air strikes. “We believe, that the death of these key figures will negatively impact the IS in its combat against the Iraqi security forces, the Kurds, and local militias,” Pentagon spokesman John Kirby stated. Government representatives said that Abu Muslim al-Turkmani, deputy of IS leader Abu Bakr al-Bagdadi, was among the assassinated. He would be the highest IS commander who had been killed this year. Also, the head of the militia’s military Abd al-Basit is said to have been assassinated.

Without water and food in the mountains
In the summer, as a consequence of the IS blitz offensive in Northern Iraq, ten thousands of Yezidis fled on to the Sinjar Mountains, where they were staying without water or food supplies . The members of the religious minority are being persecuted by the IS extremists for being “devil worshippers”. The concern that genocide was about to take place, was one of the reasons why US President Barack Obama authorized airstrikes against the jihadists four months ago.

Since the beginning of the international combat against the IS extremists on 8 August, the US has carried out more than 1,300 airstrikes in Iraq and Syria. Currently, around 1,700 US soldiers are located in Iraq. This figure is supposed to increase to 3,000 in the upcoming months. Their mission is to train 12 Iraqi and Kurdish brigades for the combat against IS, but not to fight themselves.

The original article (German) can be found on the homepage of the Tiroler Tageszeitung.