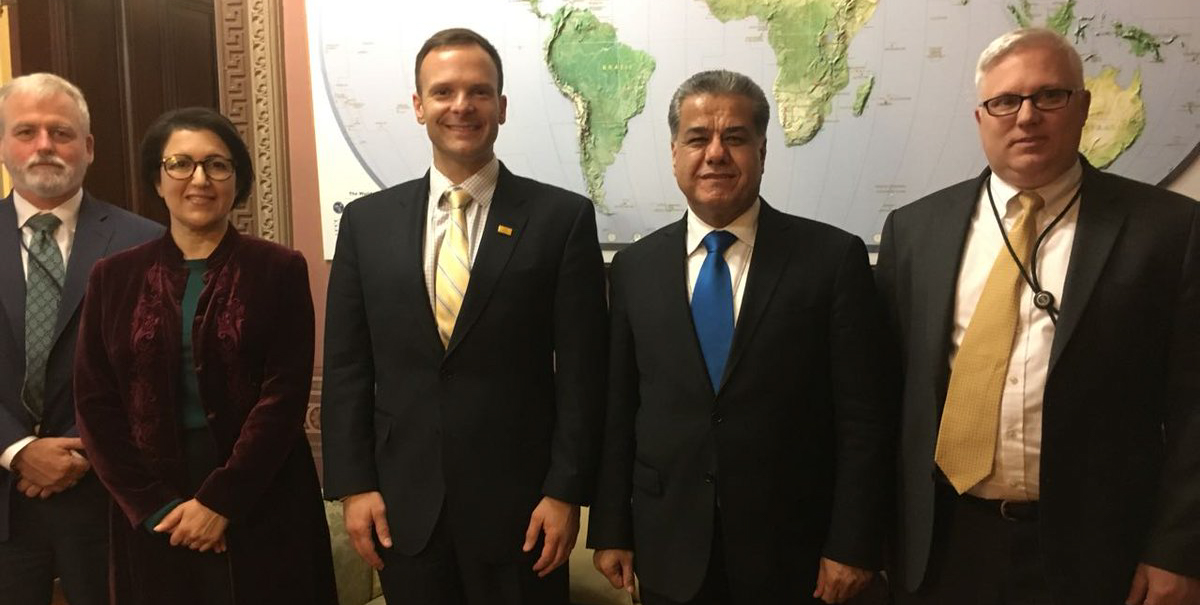 At the White House, Minister Bakir and Representative Rahman met with Trevor Hough, Special Advisor to Vice President Mike Pence, and Joel Rayburn, Director for Iraq, Iran, Syria and Lebanon at the National Security Council. At the State Department, the Minister and the Representative separately met with Brett McGurk, Special Presidential Envoy for the Global Coalition to Counter ISIS, Simon Henshaw, Acting Assistant Secretary at Bureau of Population, Refugees and Migration and Joseph Pennington, Deputy Assistant Secretary for Iraq.

Topics discussed during the meetings included the need for dialogue between Erbil and Baghdad to resolve outstanding issues on the basis of the Iraqi Constitution, protection of Kurdistan’s constitutional rights, the importance of further strengthening the partnership between the United States and the Kurdistan Region, ensuring KRG’s fair share of the federal budget and continued cooperation in the fight against terrorism.

During the meetings, Minister Mustafa reaffirmed KRG’s commitment to resolve issues with Baghdad through political dialogue and stressed the need for further engagement from the United States and other members of the international community to ensure de-escalation and withdrawal of militia groups from the disputed territories.

The above-mentioned US officials reiterated the commitment of the United States to the Kurdistan Region and expressed the readiness of the US Government to facilitate and support constructive dialogue between Erbil and Baghdad. They expressed appreciation for the sacrifices of the Peshmerga forces in the fight against ISIS and KRG’s humanitarian efforts. They also conveyed sympathy to the families of the victims of the recent earthquake in Kurdistan.

Minister Bakir said, “We are here to reaffirm our commitment to a long-term partnership with the United States. We see the United States as a vital ally and partner. We are pleased that the United States Officials reiterated their commitments to the Kurdistan Region and Iraq. Moving forward, we have encouraged the US Government to remain heavily engaged in Iraq, in order to resolve all outstanding issues between KRG and Government of Iraq and to secure a better future for all.”

Minister Bakir is on a weeklong visit to Washington to meet with US administration officials, congressional members, and the think tank community. Minister Bakir and Representative Rahman are scheduled to attend the 2017 Halifax International Security Forum from November 17-19.