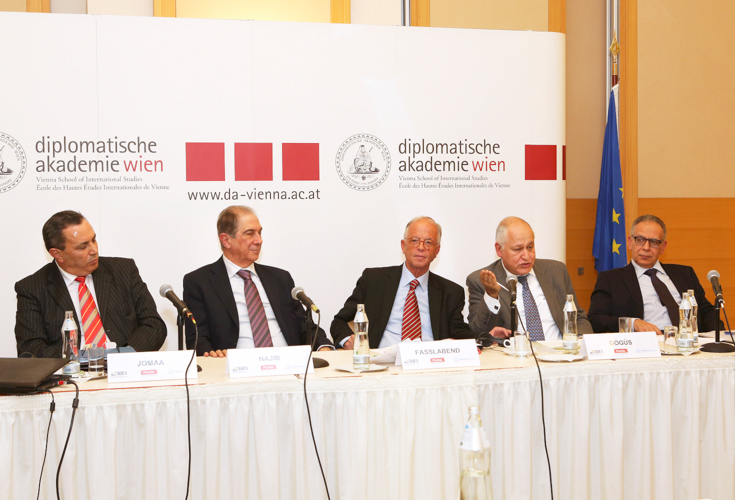 On Friday, 14 November 2014, the KRG Representative in Austria Dr. Mustafa Ramazan attended the “Europe forum: Strategic perspectives for the CFSP and the CSDP” at the Diplomatic Academy of Vienna. The conference, at which numerous renowned speakers discussed current issues regarding the EU’s Common Foreign and Security Policy and the EU’s Common Security and Defense Policy, was mutually hosted by the Austria Institute for European and Security Policy, the Politische Akademie of the Austria conservative party ÖVP, and the Wilfried Martens Centre for European Studies.

After discussion rounds on the institutional framework of the CFSP and CSDP, their strategic orientations, and on the current crisis in and around Ukraine, a panel addressed the issue “Europe and the crisis in the Near/Middle East”. Moderated by the former Federal Minister of Defense Dr. Werner Fasslabend, the ambassadors of Tunisia, Iraq, Egypt, and Turkey discussed the current crisis in the region, its effects on Europe and how the situation can best be diffused.

The Ambassador of Iraq in Austria Dr. Surood Najib gave a detailed insight on the situation in Iraq. He stated that Iraq is still facing immense challenges politically, militarily, just as in a humanitarian dimension, but that the recent cabinet reshuffle was an important step in the right direction. Dr. Najib lauded the Kurdistan Region for its enormous efforts in fighting the IS extremists, and in providing support to the countless refugees and displaced persons.

The four ambassadors agreed that to overcome the crisis, a comprehensive approach is inevitable. This does not only include joint military action of Middle Eastern, European and North American states or providing humanitarian assistance, but also that the problem of Islamist extremism – both in the Middle East just as in the West – is tackled at its roots. This is not only relevant for security in the Middle East, but also for security in Europe.